NBJC's OUT On The Hill 2015 Early Bird Registration Expiring Soon

One of the valid questions I have been getting from my younger trans sisters lately in the wake of a unprecedented deadly week of anti-trans murders is where are the Black organizations that as one sister stated to me in a private conversation  'allegedly support us'?

I can tell you for a fact that one unapologetically Black social justice organization that has had our back for years and ain't 'scurred' to say the word 'transgender' is the National Black Justice Coalition.

I have had the pleasure of attending two of the OUT on the Hill Conferences in 2011 and 2012, and was part of an all trans feminine panel in the 2012 one moderated by none other than Laverne Cox.   I was also part of a blogger's panel during that 2012 event that included the wonderful Danielle Moodie-Mills and LZ Granderson.   I have also been parts of two NBJC The Black Institutes at Creating Change events in Houston and Denver in 2014-2015

And yeah, still dreaming about those crab cakes I devoured during one OOTH2012 luncheon.

The 6th annual edition of the OUT on the Hill LGBT Black leadership Summit will be taking place in Washington DC September 16-20, and in addition to getting to attend OOTH2015 and all the events, panel discussion, workshops, plenary sessions and networking opportunities that come with attending OOTH, you get the opportunity to also attend the Congressional Black Caucus Foundation's Annual Legislative Conference events for an additional $50 on your OOTH registration.

And that's what OOTH is to me. It's not only a big family reunion, it's one of those unique conventions in which Black LGBT activists, thought leaders, elected officials, emerging leaders, young adults, elders, faith leaders, and allies get together for one inspiring week of learning, organizing, and strategic planning 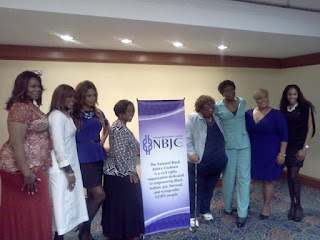 And yes, much love to the fab NBJC Executive Director and CEO Sharon Lettman-Hicks and staffers Isaiah Wilson and Venton Jones.  She has made it clear that the T is not silent in or a small letter 't' in this unapologetically Black LGBT org, and the soon to be 12 year old NBJC is one worthy of your support and investing your T-bills in..

If you're thinking about going,  the $100 Early Bird registration rate is closing out August 21, and elders 62 and up register any time for a $100 flat rate.  Emerging leaders get a 50% discount.

I'm trying to make it to DC for OOTH2015 since I haven't attended it since 2012.  Complications have kept me from going back.  I know that after I attended the 2011 and 2012 OOTH events I came back to Texas feeling empowered, refreshed and ready to do some more work on behalf of the Black LGBT community.

Hopefully Moni will be in the OOTH2015 house to report and live tweet what's going on at this year's event.

Labels: conferences/conventions, NBJC, Out On The Hill