Well peeps, Super Bowl XLIX will be kicking off tomorrow between the New England Cheatriots Patriots and the defending NFL champion Seattle Seahawks, and I will be standing by with my snacks watching all the action along with my esteemed prognostication partners Eli and 2014 regular season champion Mike .

Had a blast as usual competing with these two gentlemen in picking NFL games during the 2014 season, and look forward to doing so when the season cranks up again in September 2015.

But it's time to pick who I  believe will be the winner of Super Bowl XLIX in Glendale. AZ.

One the surface, it looks like it's the New England offense versus the Seattle defense.    But you'd be surprised to know that the Seahawks actually had the number nine ranked offense in the league while the Patriots despite the media hype is only ranked 11th.

It's also no surprise the Seahawks thanks to Marshawn Lynch have the league's number one ranked rushing attack. We also know Seattle has the NFL's number one ranked defense that is capable of making Tom Brady have a very bad day.   Tom Terrific doesn't like it when he tastes turf on a regular basis or he has to move from his comfortable throwing spot in the pocket.

Now New England's defense, while good, isn't at Seattle's game changing level.  It will be fun to see if they can keep Marshawn Lynch from going into beast mode or Russell Wilson from taking off on one of those backbreaking scrambles that tend to come at critical points in the game. 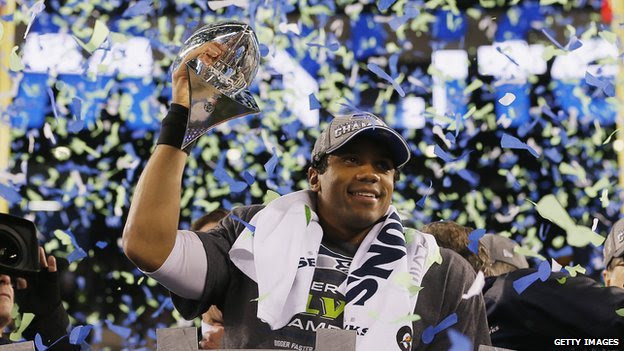 Speaking of Wilson, he has a chance to make some history.  If the Seahawks win, Wilson would become the first African-American NFL QB to lead his team to back to back Super Bowl titles.

And yep, Glendale is a much closer trip for the 12th Man than it is for the Patriot fanbase.  Translation:  The Patriots may find themselves having to run silent counts to combat the noise generated by the 12th Man.

So who is going to hoist the Vince Lombardi Trophy when this game is over on Sunday?

I'm picking the Seattle Seahawks to repeat as NFL champion