I've been aware since Thanksgiving he's been up to this shady unconstitutional BS for a while since my mom and sister got those transphobic hate pieces in the mail.|

Now it's starting to get more media coverage

In this blatant attack on Houston trans people, Wilson wants to have this language added to the City of Houston charter

Not no but hell no.  Besides, why would we trust a guy who deliberately misrepresented himself as Black to get elected to the Houston Community College system board? 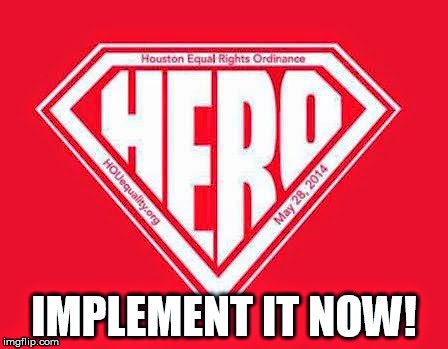 Wilson would need to collect 20,000 signatures to place his anti-trans amendment on the 2015 city ballot.

Seeing that they just failed to collect enough signatures to get HERO on this year's ballot, I would hope they would have even more trouble putting something even more extreme, discriminatory and anti-human rights in front of City of Houston voters.

And there is no fracking way I will sit idly by and allow this piece of anti-trans crap to desecrate the City of Houston's charter.

I will fight that with every fiber of my trans being to ensure the Wilson Anti-Trans Hate Amendment  dies a public and painful death.

And this is also one more glaring example of why the Houston Equal Rights Ordinance needs to be implemented without delay.
Posted by Monica Roberts at 12:00 PM