Why There Were No WNBA Posts On TransGriot This Season 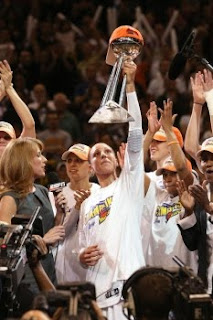 The 2009 WNBA Finals concluded Friday night with the Phoenix Mercury beating the Indiana Fever 94-86 in the decisive Game 5 to take their second WNBA championship in three years.

As you longtime TransGriot readers know I am a huge sports fan. I believe in supporting women's sports at all levels including the professional ranks. I also put my money where my big mouth is.

The WNBA for a decade was one of my passions. I was a Houston Comets season ticket holder from 1999-2001 and a enthusiastic fan of the team. 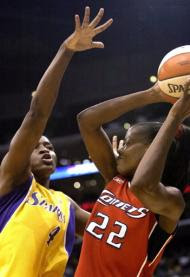 I was in a sold out Compaq Center to watch the 1997, 1999 and 2000 seasons end in championship glory for the hometown girls. I flew to LA and NY to watch Comet road games and talk trash to the Sparks and Liberty fans in the Forum and Madison Square Garden. After I moved to Da Ville I drove 1.5 hours to Indianapolis four times to watch the Comets play the Indiana Fever.

But I painfully watched from afar the piss poor way the WNBA leadership allowed my hometown team and the league's flagship franchise die last winter without giving local investors a chance to put an ownership group together to save it.

It angered me to the point where I couldn't even bring myself to watch a WNBA game on TV this summer, much less write about the league on this blog.

Loyal Comets fans got screwed in that deal. Allowing the Comets to fold was akin to the NBA leadership letting the Boston Celtics die. The Comets in conjunction with the Rockets have a display dedicated to their combined six years of NBA/WNBA titles from 1994-2000 in the Basketball Hall of Fame. 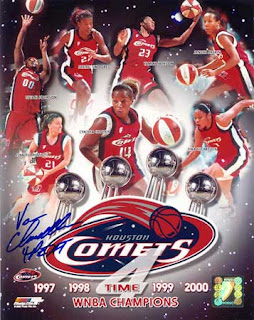 For the first time since the WNBA started in 1997, we didn't have the Comets around. For those of us in the Sea of Red whose Houston summers revolved around our beloved team, memories of the dynasty and the friendships we made with our fellow season ticket holders, it was a long, hot and joyless one.

Am I angry about the way it was handled? You betcha.

So when will I start watching, attending or much less commenting on WNBA games again? When a Houston franchise returns to the league.

And no, rooting for the San Antonio Silver Stars isn't going to cut it.
Posted by Monica Roberts at 2:55 AM