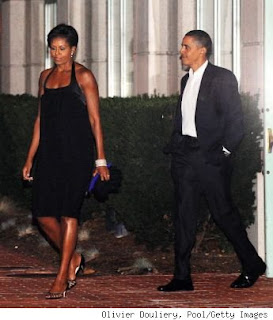 It escaped my attention that October 3 marked the First Couple's 17th wedding anniversary, but it didn't escape President Obama's.

They were married on October 3, 1992, so to celebrate the occasion last Saturday the First Couple got dressed up and headed to a local Washington restaurant called the Blue Duck Tavern for a private dinner.

It's in Washington's West End neighborhood and is an upscale, casual restaurant without a break-the-bank menu and American cuisine.

Hmm, may have to check it out.

Anyhoo, Happy anniversary to the First Couple.
Posted by Monica Roberts at 1:30 AM