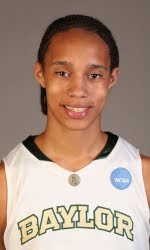 The 6-8 center was voted the preseason Big 12 Freshman of the Year.

If you need some reminders as to why she received that honor or was the most sought after female basketball player in the nation last spring, check out this link to a previous post chronicling Griner dunking on her competition enroute to leading Aldine Nimitz to the Texas Class 5A state finals.

Baylor's opening game November 7 and probably every other home game at the Ferrell Center this season is sold out in anticipation of seeing a player many people believe will take women's college basketball and eventually the WNBA to another evolutionary rim-rocking level.

It definitely will be fun this season watching to see if she can.
Posted by Monica Roberts at 3:30 PM