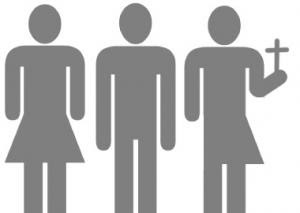 One of the things I still chuckle about from time to time is the November 2007 JCPS school board hearing.

We were fighting to get the board to adopt an employment policy that protects GLBT people in JCPS employment (unfortunately trans people were cut out of it.) I still spoke in favor of it despite my pissivity over trans people getting cut out of the proposed policy.

Marti Abernathy sent me a link a month later to a YouTube video of my JCPS school board speech. When it got to the part of my three minute speech that noted that I was a proud African American and Christian, I heard somebody loudly shout in the video, "No way!'

I was baptized in my home church in H-town on August 2, 1972. My faith has gotten me through some tough times in life and my own transition. 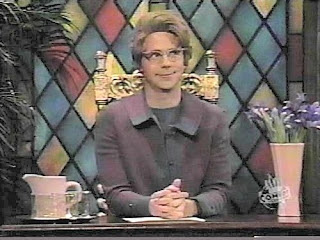 One of the things that I'm concerned about now we've got the undivided attention of the Forces of Faith-Based Intolerance, is their repeated attempts to twist scripture into a baton for beating up on trans people.

And these scriptures from Deuteronomy (where else) are the weapons of choice:

Deuteronomy 22:5 A woman shall not wear anything that pertains to a man, nor shall a man put on a woman's garment; for whoever does these things is an abomination to the LORD your God.

Deuteronomy 23.1 No one whose testicles are crushed or whose penis is cut off shall be admitted to the assembly of the Lord.

So I guess y'all won't be letting Lance Armstrong or anyone else whose has testicles removed because of cancer or other reasons in your hate churches any time soon, much less any women wearing pants or pantsuits?

Oh by the way, right wing Christohaters, the words 'love the sinner but hate the sin' you peddle as your justification for your homophobia/transphobia do not appear together in a scripture anywhere in the Bible.

Thanks for playing, Catholic Church and fundies, but we have lovely parting gifts for you.

You've got two major problems in trying to run this 'use the Bible to beat up on transpeople' game. 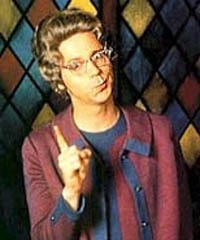 The first order of business is that you have to make a case that transsexuality is wrong.

If you claim that I am a divinely inspired and divinely created being, how can me or any transperson simply living our lives be wrong, especially when the medical evidence is swiftly mounting that transpeople are part of the diverse mosaic of life?

The second part of that does not compute conservalogic is as a friend better versed in theological issues pointed out in this Rain and Clouds blog post, you have to show that being trans makes it impossible to have a relationship with God.

Wonder if that's why you fundies are desperately trying to rewrite the Bible and make it more conservative? Only proves to me the moral bankruptcy of the conservative movement because truth, as you are acknowledging by this attempt to rewrite scripture, has a liberal bias.

But since you fundamentalist peeps believe in the inerrancy of the Bible, that cuts both ways.

"O Lord, you have searched me and you know me. For you created my inmost being; you knit me together in my mother's womb. I praise you because I am fearfully and wonderfully made; your works are wonderful, I know that full well. My frame was not hidden from you when I was made in the secret place. When I was woven together in the depths of the earth, your eyes saw my unformed body. All the days ordained for me were written in your book before one of them came to be."

Okay, now we'll move on to the scriptures that talk about the Biblical day equivalents of transpeople, the eunuchs..

4For thus says the Lord: To the eunuchs who keep my sabbaths, who choose the things that please me and hold fast my covenant, 5I will give, in my house and within my walls, a monument and a name better than sons and daughters; I will give them an everlasting name that shall not be cut off.

Then there's the story in Acts of Philip interpreting the Isaiah prophecy about Jesus to a eunuch on the road to Jerusalem from Gaza, and subsequently baptizing that eunuch. 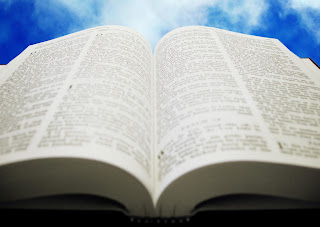 26Then an angel of the Lord said to Philip, “Get up and go toward the south to the road that goes down from Jerusalem to Gaza.” (This is a wilderness road.) 27So he got up and went. Now there was an Ethiopian eunuch, a court official of the Candace, queen of the Ethiopians, in charge of her entire treasury. He had come to Jerusalem to worship 28and was returning home; seated in his chariot, he was reading the prophet Isaiah. 29Then the Spirit said to Philip, “Go over to this chariot and join it.” 30So Philip ran up to it and heard him reading the prophet Isaiah. He asked, “Do you understand what you are reading?” 31He replied, “How can I, unless someone guides me?” And he invited Philip to get in and sit beside him. 32Now the passage of the scripture that he was reading was this: “Like a sheep he was led to the slaughter, and like a lamb silent before its shearer, so he does not open his mouth. 33In his humiliation justice was denied him. Who can describe his generation? For his life is taken away from the earth.” 34The eunuch asked Philip, “About whom, may I ask you, does the prophet say this, about himself or about someone else?” 35Then Philip began to speak, and starting with this scripture, he proclaimed to him the good news about Jesus. 36As they were going along the road, they came to some water; and the eunuch said, “Look, here is water! What is to prevent me from being baptized?” 38He commanded the chariot to stop, and both of them, Philip and the eunuch, went down into the water, and Philip baptized him. 39When they came up out of the water, the Spirit of the Lord snatched Philip away; the eunuch saw him no more, and went on his way rejoicing.

And if you're wondering what Jesus had to say about the issue, peep Matthew 19:12

Since we know there are many places in the Bible in which scriptures contradict and cancel each other out, here's the antidote for whenever a Reicher throws Deuteronomy 23:1 at you.

But if you're a real Christian, these two scriptures are the ones that matter.

For God so loved the world, that He gave His only begotten Son, that whosoever believeth in Him should not perish, but have everlasting life.

Christian does not mean 'white'-wing, fundamentalist, intolerant, gun-fetishist, Republican-voting, homeschooled, ignorant Know-Nothing. But that's what your crap over the last 40 years brings to most people's mind whenever the word is mentioned.

As a Christian trans person, I'm tired of my faith being used as a weapon to beat me and other people down with, a shield for ignorance and intolerance, and a vehicle for sowing division and discord.

Fortunately there are other Christians across many denominations who are just as tired of the crap as well and are seeking to include us and understand our issues instead of exclude and reject us.

It would surprise you to know I'm not alone in being a trans Christian. If you walked into our major trans conventions most of the people in attendance will not only repeat the same things I'm articulating in this post, but can also tell you what the Transgender Child's Prayer is:

Lord, please let me wake up and be a girl(boy) forever.

My faith has only become stronger as I've transitioned, become more confident in who I am and more spiritually attuned to the person I was born to be.

I am a Christian in the tradition of the Rev. Dr. Martin Luther King, Jr. who combined his unshakeable faith with superior intellect and a curious mind.

I am a Christian who believes that we should do more to include trans people and not exclude them.

I am a Christian who despises 'prosperity gospel' and thinks it has sidetracked the Black Church from its historic message of speaking truth to power.

So I'm naming and proclaiming this day that I am a Christian who happens to be a proud African descended transperson as well, and I'm not waiting for your right wing flavored dogma to catch up with reality.
Posted by Monica Roberts at 11:30 AM