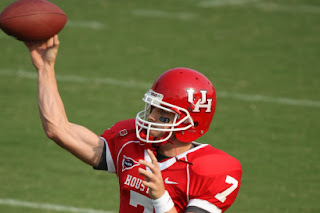 My Number 15 ranked University of Houston Cougars won their matchup against the Southern Mississippi Golden Eagles, but it wasn't easy. Both teams combined for 93 points and 1,358 yards in a defense optional shootout.

At one point during this wild game UH held a commanding 40-22 lead with 12:25 left, but two Southern Miss touchdown passes from Martevious Young to wide receiver Gerald Baptiste in a span of 5:25 tied the game with 57 seconds left.

It took Heisman Trophy candidate Case Keenum throwing for a personal best 559 yards and five TD's, a 48 yard touchdown throw to Patrick Edwards with 21 seconds remaining to break the tie, and the defense swatting down a Southern Mississippi Hail Mary pass in the end zone to preserve the 50-43 win over one of the C-USA East Division co-leaders. 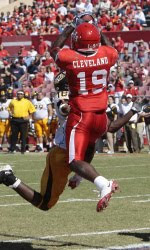 The win was a Halloween treat for Cougar fans at the Rob as they witnessed the Cougars 13th straight home win.

In addition to the offensive fireworks Keenum provided, the Cougars racked up a season-high 750 yards of total offense as they bumped their season record to 7-1 for the year and 3-1 in C-USA West play.

Next up are road games versus Tulsa and UCF before they return to Robertson Stadium and finish the season at home against Memphis and Rice.
Posted by Monica Roberts at 4:30 PM