What Would Spelman College Do In This Trans Feminine Student Situation?

“Schools should be focused on building our next generation of leaders, not discriminating against them." Calliope Wong

I had an interesting conversation with Samantha Master the other day about getting HBCU's to recognize that Black TBLG students exist.   HBCU law schools are ahead of the game when it comes to having non discrimination policies that included gender identity and expression but the HBCU main campuses that host these law schools surprisingly don't.

We discussed how it would be in their best short and long term interests to ensure their campuses were open, inclusive and affirming places for TBLG students and they needed to get busy enacting policies and procedures to make that happen.   And yes, as a group they also needed to improve on the sorry situation of having only one of the 105 HBCU's (Bowie State University) having a dedicated LGBT center on campus.

Our conversation turned to transteen Calliope Wong and her recently being turned down twice by Smith College for enrollment while hypocritically allowing transmen to matriculate on campus if they transition after they have been admitted.  Smith College according to Dean of Admissions Debra Shaver and HuffPo Gay Voices has put together a committee to look at the issues that affect trans applicants.

The Smith committee will begin its work at the start of the 2013-14 academic year in September and includes students.   The students involved on this committee have indicated that Smith would stop using the gender marker on FAFSA applications when evaluating trans students for admission.

While I hope the situation at Smith is substantive change and has a positive resolution for future trans applicants to the college, mine and Samantha's HBCU centric discussion put me in 'What if?' hard solid thinking mode.

What would happen if you flipped the racial script and instead of Calliope Wong, had a bright African-American trans feminine student named Kendra Nicole Williams in this mix?

Kendra wants to attend the elite African-American women's HBCU Spelman College because it's her dream school and applies.  She transitioned at age 14 and has a supportive family who helped her live her trans teen feminine life.   Kendra excelled academically in her high school and has begun the process of changing her identity documents.

But because her family doesn't have a spare $20K in the bank genital surgery is out of the question right now because they see it as a bigger priority to use whatever extra money they have to help Kendra get the quality college education she needs.


How would Spelman handle that situation I just outlined?  Would Kendra be accepted into the Spelman Class of 2017 with open arms or would they fumble the ball just as badly as Smith did?

Atlanta based Spelman, which was founded in 1881, is one of the oldest historically Black women's colleges in the nation. I chose Spelman for this thought exercise because it is analogous in its elite status to Smith. in addition to it being among the nation's top ten best women's colleges as ranked by Forbes magazine, it has prestigious notable alumni and faculty.

For the sake of this exercise in hard solid thinking, let's assume Spelman fumbled the ball and refused to admit Kendra for the same reason Smith did.  It denied admission to Kendra based on a mismatched FAFSA gender code.   How much media negativity do you think Spelman would get right now because of that decision?

I submit it would be ten times worse than what Smith got.

In those media stories roasting Spelman over the coals you would see the ''Blacks are more homophobic' meme repeatedly come up in whatever stores they chose to write about it in addition to pointing out they are across the street from all-male Morehouse College and talking about its homophobic fails over the years.

The mainstream media seems to take perverse pleasure in flipping the journalistic middle finger at POC trans women, and you can bet their penchant for doing so would come into play here.

Don't even get me started about the Black gossip blogosphere and the transphobic ignorance they gleefully display on a regular basis.  You can count on a few hip hop formatted radio station morning shows jumping into this transphobic media mix and yours truly having to spend a few weeks putting some outlets on blast for the negative and sensationalistic reporting that some newspapers of record would aim at Kendra just for grins in addition to asking Spelman what's up with not admitting Kendra?

And to tweak the hard solid thinking on trans issues still further, what if the Kendra student in my earlier example was a cis female who enrolls and a year later transitions to male?   I have heard of this situation occurring at Smith and other Seven Sisters institutions but haven't heard if it has occurred at Spelman yet.

What would Spelman do when (not if) that happens?  Do they have non-discrimination policies and support structures in place to make it a welcoming environment for that now transmasculine student?

So let's end the 'What If' exercise for now and move on to the known quantities about Spelman.  Beverly Daniel Tatum, the current Spelman president has a well earned reputation of being a supportive ally on the SGL issues.  Spelman has been ahead of the curve in terms of being a role model for HBCU's that embrace tackling LGBT issues.

In addition to Spelman having AFREKETE, the highly regarded LGBT and ally organization on its campus, it was the host campus for the groundbreaking Audre Lorde Historically Black College and University Summit on April 29, 2011.   The one day summit was spearheaded by Dr. Beverly Guy-Sheftall, the founding director of the Women’s Research and Resource Center, attended by representatives of nine HBCU campuses from across the nation and was enthusiastically supported by President Tatum.

But I don't know as of yet what President Tatum's stances are concerning trans issues and I would love to have that conversation with her.  Spelman despite being the undisputed leader on LGBT issues in HBCU collegiate world still as of this writing doesn't have a dedicated LGBT resource center on its campus like Bowie State does..

I believe that in my earlier example, based on the groundbreaking work that Spelman is already doing that my fictional trans student Kendra would be admitted.   She might have a few issues she'd have to deal with like what would happen if she wanted to pledge one of the Divine Nine sororities on campus or the possibility of somebody transphobically tripping in the dorms because of her pre-operative status, but in terms of getting a quality education in an HBCU setting as a trans student, she'd probably be in the best place for it on paper.

Trans students will bring some issues to the table that may seems daunting to a women's college but are manageable with thoughtful preparation, clear enforced policies and procedures, and established support systems.  Most importantly, they have administrations that make it crystal clear discrimination aimed at trans and SGL students will not be tolerated. 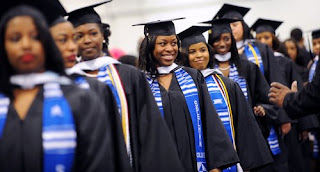 What I said to close out my 'HBCU's Better Recognize Black TBLG Students Exist' post still applies a year later.

HBCU's need to send the unmistakable message to their faculty, current and future students, alumni, and the communities they serve that discrimination against LGBT students on HBCU campuses will not be tolerated.   HBCU's need to show they have inclusive and welcoming campuses, and they are willing to include LGBT students in their ongoing missions to uplift the race through educational achievement.

I believe that Spelman and the other Black HBCU women's colleges such as Bennett are taking what happened recently at Smith as a cautionary tale.  I hope they are engaging in hard solid thinking to avoid the public relations nightmare Smith fell into because of the lack of admissions procedures and policies in place for trans feminine students.

Based on the work they've already done, I'm confident Spelman will be prepared for the inevitable day when a Black trans woman comes application in hand to fulfill her dream of getting an education on their distinguished HBCU campus and become one of the exceptional Black women Spelman College has produced for over a century.