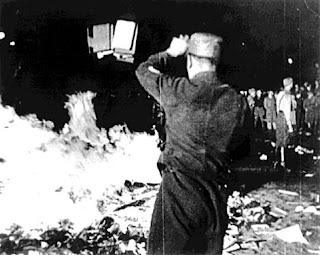 Where they burn books they will also ultimately burn people.'   Heinrich Heine

So what does that day have in common with us TBLG people?

Many of those books that went up in flames that night as Nazi Propaganda Minster Joseph Goebbels spoke to a crowd of 40,000 that evening came from the recently raided sex institute of Magnus Hirschfeld.

Hirschfeld was fortunately out of the country on a lecture tour in the United States when it happened, but he was doing much of the pioneering transsexual research there at the Berlin based institute and it went up in flames.   It's also speculated that the client lists and names seized in that Institute raid led to the murderous Operation Hummingbird purge against the Ernst Rohm led SA by the Gestapo and the SS a year later.

And as a trans person, you are also left to ponder the question had Hirschfeld's institute and those books and papers survived, how much futher along trans related medical care and research wpuld be if it hadn't been burned that night in the Bebelplatz?