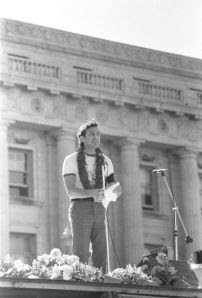 Today would have been the 83rd birthday of Harvey Milk, the iconic civil rights leader who became the first openly gay person to be elected to public office in California when he ran for and won a seat on the San Francisco Board of Supervisors in 1977.

His June 24, 1977  'You've Got To Have Hope' speech that announced his run for supervisor is still as timely, eloquent and relevant today as it was when he first delivered it.

He was only in office for eleven months until his and Mayor George Moscone's assassinations by former supervisor Dan White on November 27, 1978  but was responsible for passing a stringent gay rights ordinance in the city.

His May 22 birthday is now celebrated in the state of California as an unofficial holiday and Harvey Milk Day events have begun to spring up in various cities around the country to celebrate the life of this iconic leader.


Happy birthday Harvey!    We could use a lot more visionary people like you in the 21st century LGBT community.
Posted by Monica Roberts at 7:00 AM