While the international community was focusing on Uganda and its attempts to pass their blatantly unjust 'Kill The Gays' Bill, they should have also been focused on Abuja, Nigeria.

In the most populous nation on the African continent, the Nigerian House of Representatives today passed the unjust 'Same Sex Marriage Prohibition Bill' that criminalizes being gay or lesbian in the country, bans gay marriage in a church or mosque and outlaws any groups actively supporting gay rights.  It was already approved by the Nigerian Senate in November 2011 and is now on its way to Nigerian President Goodluck Jonathan for his signature.

If Jonathan signs it, gay or lesbian couples who marry could face up to 14 years each in prison.  If you witness the marriage, attend the wedding or helps a gay couple get married, you are risking a 10 year sentence behind bars. Anyone taking part in a group advocating for gay rights or anyone caught in a “public show” of gay affection also would face 10 years in prison if convicted by a criminal court.

As of yet President Jonathan hasn't indicated whether he will sign the unjust bill or not.

Save your breath if you're thinking that Western powers can put pressure on the 'Giant of Africa' by threatening to cut off financial aid.   Nigeria pumps 2 million barrels of oil per day and the United States is one of their major customers.  The last time I checked the price is hovering around the $90-$100 per barrel range.

Gay sex has been banned in Nigeria since the British colonial rule days and our gay and lesbian cousins there face open discrimination and abuse in a country divided by Christians and Muslims.   They may fight each other,  but the two things they universally agree on are soccer and uniform opposition to homosexuality. 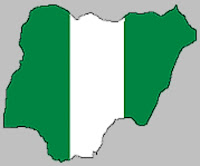 So it'll be up to local activists in this nation of more than 160 million people, with the help of the international community as they did in 2007 and 2011 to do the bulk of the education and fighting against this unjust law.

Chidi Odinkalu, the chairman of Nigeria’s National Human Rights Commission, said he only learned about the House’s vote late Thursday night and said the bill likely would be challenged in court.

Because right now, that's their only option if President Jonathan decides to sign this un-African and unjust bill