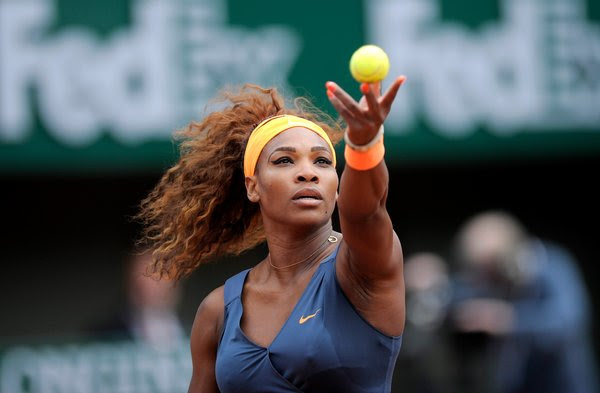 My fave tennis playing siblings are in Paris for the 2013 French Open, and world number one and tournament number one seed Serena Williams continues to handle her tennis business at Stade Roland Garros.

The latest person dispatched to the sidelines of this women's tournament by Serena was 19 year old French homegirl Caroline Garcia.   Andy Murray may think she's a future number one but she didn't show it against the current world number one player.

Little Sis took only 62 minutes to made quick 6-1, 6-2 work out of her and get ready for her third round match against Sorana Cirstea of Romania

And yep, in the lower half of the women's bracket 17 seeded Sloane Stephens is making noise.

In the doubles competition they pulled out.  No explanation yet as to why but speculation is because Venus did report pain in her lower back after the three set first round loss to Urszula Radwanska.  They have won 13 Grand Slam doubles titles as a duo, so we'll see if they get together to defend their 'Williams-don' doubles title.

If Little Sis handles her business as expected against the 26th seeded Cirstea she'll face in the fourth round the winner of the Petra Cetkovska-Roberta Vinci match.
Posted by Monica Roberts at 12:00 AM