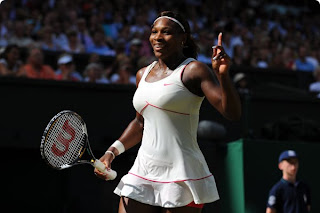 The haters aren't happy, but for the tenth time in eleven years, there will be a Williams sister in the Wimbledon Ladies' singles final on Saturday.

The Number One seed took out Petra Kvitova in straight sets 7-6(7-5), 6-2 to return to the final for the third straight year. She is seeking her fourth Wimbledon title and her 13th overall. All three of her previous Wimbledon titles were won against Venus in 2002, 2003 and 2009.

Serena will get a chance to exact revenge against Russia's Vera Zvonareva, who with Elena Vesnina upset her and Big Sis in the Ladies' doubles quarterfinals.

I hope she does. I was less than thrilled with the haters posting on the Wimbledon website following their quarterfinal doubles loss and posted my own comment.

I guess they'll be wearing their pointed hoods Saturday as they root for the latest Great Eastern European Tennis Glamazon Hope to attempt to derail a Williams sister from picking up another Venus and Serena Rosewater Dish.
Posted by Monica Roberts at 12:30 PM