Phred Phelps brings his reprehensible Phamily of Phools to Dallas starting July 9 for a series of protests. The primary targets are The Resource Center Dallas, and Beth El Binah, a mainstream Reform Jewish congregation with a longtime LGBT outreach that meets at the Center.

They also are planning protests at several other North Texas sites such as the Dallas Holocaust Museum in the West End, the Texas Jewish Post and Cathedral Guadalupe.

As is the case with many GLBT communities or organizations faced with dealing with his Westboro Baptist 'Church' christofools, local organizations use his visits as an opportunity to fundraise for causes within the community. 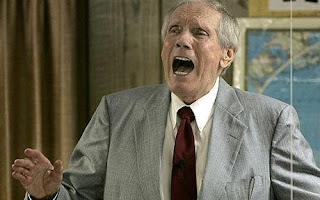 The standard operating procedure is to have people offer to donate a certain dollar amount for every minute Fred's Fools protest in their city, with that money going to help GLBT community causes.

It has the dual effect of not only turning the Phelps Phamily sojourns into money raising opportunities for the targeted community, once the Phelpses find out, they cut their protests short.

Resource Center Dallas has started a 'Hell Freezes Over' campaign in advance of the Westboro Wackos visit. As of 11 AM CDT they have already raised just over $1000 for their counterprotest, and Phred hasn't even arrived in the Dallas area yet.

Resource Center Dallas in addition to serving as the host location for a GLBT friendly Reform Jewish congregation, has provided a hot meals program for more than 100 HIV-positive clients. They have served those nutritious lunches on Monday through Friday since the early 1990’s.

The Center recently had their ice machine break down. They are temporarily receiving ice from their partners Caven Enterprises and Cathedral of Hope, but need $3000 to purchase a new energy-efficient unit to replace the old one.

The money raised in this campaign will go towards replacing the ice machine first, and any funds raised above and beyond that will go to the Center's general operating fund.

So here's hoping Phred's Phools spend lots of time in the Dallas-Fort Worth metroplex and raise lots of cash for Resource Center Dallas in the process.
Posted by Monica Roberts at 4:00 PM