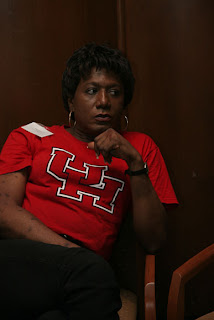 For Day Two I decided to go casual and leave the house a little earlier so I wouldn't have the METRO drama I endured yesterday.

I decided I just couldn't hide my Cougar pride and showed up in my UH t-shirt and jeans instead of being in diva mode. I got there early enough to partake of the continental breakfast and talk with some of the younglings like Ambi and Lowell and veteran activists such as Lisa Scheps.

I continued to hear how happy people were to find out the Texan in Exile was back on Lone Star soil, that my blog is well thought of, and people on the national trans leadership scene think highly of me.

If y'all think that highly of me, then hire a sister for your organizations.

While that made me feel empowered and happy, this event still wasn't about me. It was about Day Two of the Texas Transgender Nondiscrimination Summit and what WE could do to help bring change on and off Texas college campuses for the better. 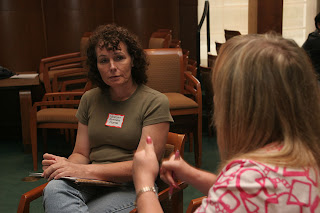 After giving birthday girl Vanessa a big hug, we returned to the Kyle Morrow Room to pick up where we left off in the TTNS Day One proceedings on Tuesday.

After listening to the housekeeping announcements, my Group 5 cohorts and I headed to our group moderated by Shane Whalley.

It was a discussion about domestic partner benefits and the problems of getting them in a GOP dominated state. I did contribute some points from my time in Kentucky about how UK and U of L have managed to do so with roughly the same political climate and budget deficit situation. 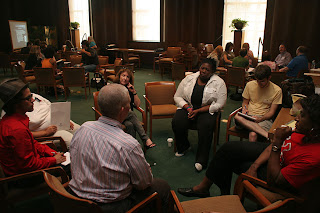 When those 30 minutes were up, it was off to Randall Terrell's group to discuss the current landscape of Texas politics, the upcoming 2010 midterms, redistricting and how all of this affects the Texas TBLG community.

That was another group I was more of a active listener in because it was helping me get back to speed on the Texas political climate circa 2010.

Our group then went to our final mini session of the TTNS, moderated by Jo Tittsworth on another subject I've discussed or thought about more than a few times in terms of intersecting ideologies.

Thirty minutes wasn't enough for this group. We talked about lobbying strategies, intersectional work, incorporating different points of view in compiling and executing those strategies and how factors like race, ethnicity and class can impact it. Jo, Maria and I even talked about interesting things that happened to us while lobbying at the state, local and federal level.

We then took a break, then went into our large group before we broke for lunch that Lowell and Katy facilitated. 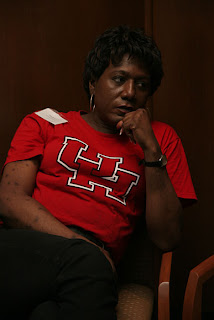 They hammered five main points about strategic planning that we expounded on in the discussions.

We then broke for lunch while a smaller group headed by Randall began working on a joint support statement for Nikki Araguz that we discussed and cleaned up from the initial draft during the lunch break.

Yes, even during conferences sometimes real world events have a way of inserting themselves on these preplanned affairs that compel the activists gathered at that venue to take some kind of action.

I'm still bummed about a protest I missed at the 1999 Creating Change conference I attended that took place in Oakland. It was in response to an African-American transwoman who was assaulted outside the convention center, then was disrespected by the Oakland po-po's who were called to the scene to take the report.

I had to fly back home to be at work that Sunday, and while I was winging back to Texas from the San Francisco-Oakland Bay Area, the Creating Change conference attendees were marching in the streets.

There was also a conversation I had with some young African American activists in which I discussed with them the emotions and issues with being the lone POC's sometimes in conferences and organizations. I pointed out POC's would like to be active participants at many LGBT conferences and orgs in the community, but circumstances sometimes prevent them from doing so or we're not asked. 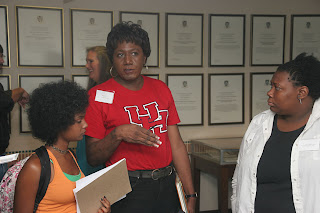 I advised them that if they find themselves being the Lone Sistah in the room, to be fearless in speaking up, saying what's on your mind and not be too overly concerned about it. You're damned if you do and damned if you don't no matter what happens.

If you don't speak up, you'll be kicking yourself for not doing so. If you do and peeps are going to trip about you representing your constituency and saying something that may not line up neatly with the groupthink in the room, so what?

After lunch came the role playing scenarios, and the question and answer discussions that followed them utilizing the strategies we'd spent a day and a half learning. 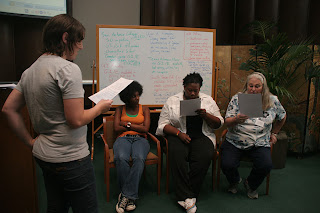 Then came the concluding remarks from Jo, the post test and evaluations, and just like that, the 2010 Texas Transgender Nondiscrimination Summit was over.

Before we left, we've been collecting donations toward a fund to help defray the costs of Nikki Araguz's legal expenses since her accounts have been frozen. It was $100 in cash and $200 in checks.

I spent a few minutes talking to some of the college students and other people I'd gotten to know over the last day and a half before departing from the Fondren Library and walking across the Rice campus to Fannin St. and my train stop.

I'm looking forward to interacting with them on upcoming projects and speaking engagements inside and outside the Houston metro area. You can also add Texas State to the list of possible places you may see the TransGriot speaking.

I'm looking forward to if I'm available to do so, stepping on the Texas A&M campus for the 2011 TTNS. Info and dates coming soon.

Hopefully at the 2011 event I'll see representatives and attendees from HBCU's such as Texas Southern and Prairie View A&M in the house as well.

Thanks for this update and luv from Jamaica