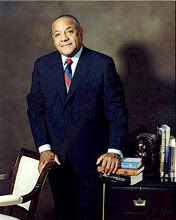 “It is often easier to become outraged by injustice half a world away than by oppression and discrimination half a block from home.”

When I read that quote from the distinguished journalist Carl T. Rowan, I thought about the recent situation involving Malawi's Tiwonge Chimbalanga and Steven Monjeza.

People in the States and around the world mobilized to protest the outrage of throwing people in jail simply for who they chose to love. President Obama and other people around the world and across the African diaspora commented on it.

Numerous blog posts, news stories and thousands of Facebook messages and Twitter tweets were written about this case.

Some of them were jacked up as well.

But when it comes to the mistreatment of Black transpeople inside the borders of the United States who are being killed, facing discrimination, police brutality and violence, those same people who were vocal about what happened to 'Auntie Tiwo' and Steve are indifferent to, unconcerned about and frankly in some cases don't care to muster the same level of outrage and anger when it comes to us.

I'd like to see the Black Church stop doing the dirty work of white fundamentalists and stop parroting their faith based hatred of trans people.

I'd like to see the African-American cis community stop shunning us and embrace their African descended trans brothers and sister.

The point is, we're affected by some of the same issues that ail the larger Black community, and it's past time we joined forces to help come up with ways to solve those problems.

I'd like to see our legendary community civil rights organizations do more to give us a helping hand integrating with the African-American community instead of the back of their hand.

And finally, we need our chocolate SGL counterparts to step up and be drum majors and drum majorettes for justice where it concerns us.
Posted by Monica Roberts at 6:00 AM