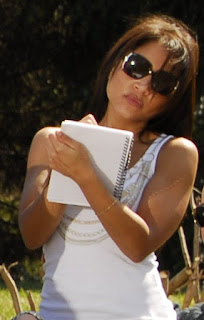 I'm rapidly approaching 6 million hits on this nine year old blog, and it's an upcoming milestone I'm exceedingly proud of.   I'm also proud of the fact that despite some of the challenges that have occasionally popped up, I've been blessed to be able to keep writing on these unapologetically Black trans electronic pages for almost a decade.

But the reasons I write on this blog are multilayered.   First, I love doing it.   There are times I'm up until 3 or 4 AM in the morning compiling posts because a thought crossed my mind and I can't sleep until it has been placed on electronic paper.

There are time I've arisen before the sun to start a writing day that continues for eight to ten hours.

And as many people who have been to conferences with me know, sometimes they have been frustrated in their attempts to spend quality time with me in the lobby or bar because I have retreated to my room or the hotel's cluster of computers to write for hours.

And from time to time I have to tell y'all what's going on in my own life.

Many times I write to inspire my trans brothers and trans sisters to aim higher in their own lives and be better people than our haters.   It's vitally important in a time period in which society is attacking our very humanity and telling us we shouldn't exist, that someone is writing and saying things that not only counteract the anti-trans negativity, but motivate us to bump the haters and handle our business.

And yes, there are times when I write to help me think about and get over some issues I'm personally dealing with on my own evolutionary feminine journey so I can be that leader, role model and quality human being I strive to be.

I've had at least four people write me over the life of the blog and tell me that perusing my TransGriot blog posts kept them from committing suicide.   I've had others say my posts helped them get through difficult and trying times in their own transitions or was the nudge they needed to make it happen.

And as a writer intimately familiar with the trans community's history, it is my duty to disseminate it to you so you can pass it down to the next generation of trans people and those new to our community.

Hey, that's why the blog is named TransGriot

I've had countless others say thank you to me for doing what I do and for TransGriot's existence.   Well, you can thank my sis from another mother Jordana LeSesne for kicking me in the behind until I started it in January 2006

But the main reason I write is encapsulated in a Maya Angelou quote in which she said, "There is no greater agony than bearing an untold story inside you."

I have been blessed with the talent, ability, and a glorious opportunity to tell those stories, and I am compelled to tell them.

And that's why I write.