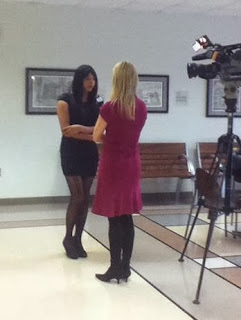 A few years ago I met this amazing and beautiful young Latina woman during a local event not long after I moved back to Houston from Louisville.

I watched her tell her story about growing up in Honduras as a young trans feminine woman who moved to the US to get her education and make her dreams come true, I was also impressed by her intellect.

As I've gotten to know Marie Angel, I'm also been impressed by her determination and drive as she strove to balance her collegiate studies with her work and personal life.

She managed to at times add a little advocacy into her life equation.  She was part of the effort on the University of Houston Downtown campus to get gender neutral restrooms there last year, and was invaluable in explaining the issue to our local Spanish language media.

Was experiencing mixed emotions when Marie told me after that TSU panel that she was now engaged, and will be getting married.

While that is wonderful news and I'm deliriously happy for her. the bad news part of it is the man who was smart enough to put a ring on her finger lives in California, and she's moving there to be with him.

Thursday was the last day she spent here in H-town, and she's packed up the car and pointed it west toward California and a new chapter in her life.   While I'm going to miss being able to see her from time to time, I'm also happy that she has found someone to share her life with, even if it is on the West Coast.

Goodbye, Marie Angel!    All of us who love you in Houston will miss you, but wish you the best of luck and safe travels as you begin this new adventure and a new life