What I'm Looking For In A Houston Mayoral Candidate

The wonderful thing for me about living in my hometown is that ever since I moved back home in May 2010, Annise Parker has been my mayor.    If it weren't for term limits, I'd bet you my last dollar she would easily win reelection to the mayor's chair for a fourth term if she could run again.

And this is why I hate term limits people, but that's a discussion for another day.

Since she is term limited, that has set off a mufti-candidate scramble for her soon to be vacated seat.  The declared candidates include the man Annise beat in 2013 in Ben Hall, TX State Rep. Sylvester Turner, former Harris County Sheriff Adrian Garcia, Councilman Stephen Costello, Bill King, the former mayor of Kemah, TX and retired United Airlines executive Joe Ferreira.

There are others considering it, but the clock is ticking toward the date they can officially file in August for the seat and fundraise for what is sure to be an interesting campaign when it kicks off around the tradition start for Houston civic elections around Labor Day

And this is your not so gentle reminder to get registered to vote if you aren't already so that you can take part in the November 3 election.

The largest city in Texas since 1930 is continuing to grow, and will pass Chicago probably before the end of this decade to become the third largest in the United States. But with that growth comes other issues that I am concerned about as a unapologetic African-American trans Houstonian

One is affordable housing.   There are a lot of units being built with more high rises dotting our skyline.   Many of those new units are being built alongside the METRORail light rail line of which two more will be opening for revenue service on May 23.   But those units being built are unaffordable to many people in this city.

That needs to change to where we have provisions for mixed income housing and possibly incentives for building housing for low income people.  Not all area of Houston have shared in its prosperity, so we need to come up with ways so that prosperity and development positively impact neighborhoods like South Park and 5th Ward and eliminate food deserts.

Speaking of light rail, it not only needs to be expanded and extended to Hobby and IAH, we need to add commuter rail to the mix.   We can no longer build freeways to deal with the increasing traffic loads in the Houston metro area.

The light rail needs the east west Blue line built toward the Galleria and the Gold Line through the Galleria area is currently being done as a BRT (bus rapid transit) that can be converted to light rail when needed.

Transportation and infrastructure is also an issue in a city that covers 599.6 square miles and three counties, and I'm interested to hear what the candidates have to say about it, especially in a regional context.

And yes, HERO not only needs to continue to be implemented, I would add a category to it in terms of formerly incarcerated folks who have done their time and are trying to restart their lives. 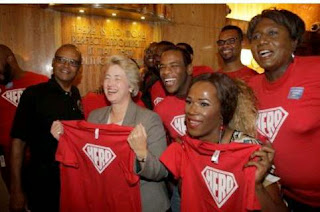 One thing that will be a deal breaker for any Houston mayoral candidate (Ben Hall) seeking my vote is non-support of the current HERO or pledging to kill it.  TBLG Houstonians are part of this community's over 2.2 million people, and we aren't going away.

You must respect and protect our human rights and any candidate that wants to demonize me to curry favor with the Baptist Ministers Assn of Houston and Vicinity, Ed Young, Dave Wilson or suburban haters like Steve Riggle and Dave Welch will not get my vote.

I have a few months to decide before I hit the polling place which  person deserves my vote as my hometown's  next mayor, but you can bet as the mayor's race intensifies, the commercials start appearing on TV and radio, I'll have a lot to say about it on these electronic pages.