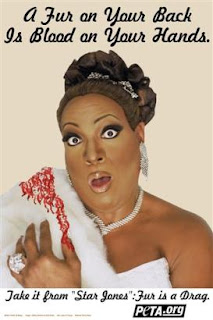 Y'all know I can't stand People Eating Tasty Animals, oops the People for the Ethical Treatment of Animals fools.  It's not only because of their constant racist, sexist, transphobic, fatphobic, homophobic (pick one) fail in pushing their message, it's also run by Ingrid Newkirk who is best buds with FOX Noise's Bill O'Reilly.

Fresh off trying to pick a fight with Flavor Flav over his fried chicken restaurant in Iowa, the PETAoids have once again tried to appropriate African-American history and icons in order to pimp their agenda after we have repeatedly told their vanilla privileged behinds to refrain from doing that.

Flav's new yardbird venture is now closed because of some trouble back in April with some employee paychecks that bounced and disputes with his partner's business practices that resulted in its closure.

This latest episode of PETA failing badly has them according to BET.com putting up a six sided display across from the Museum of Natural History in Washington D.C. that compares animal cruelty to slavery, complete with images of cruelty to African-Americans and the Dr. King “Injustice anywhere is a threat to justice everywhere” quote

The NAACP called PETA's azzes out in 2005 over a traveling exhibit entitled: "Are Animals the New Slaves?" that compared images of lynched African-Americans to slaughtered cows. 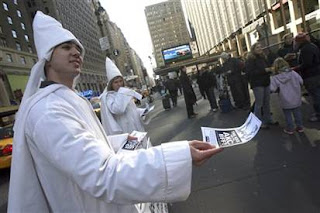 They were also called out for wearing Klan hoods to the Westminster Dog Show in New York and comparing it to the Holocaust.

Come to think of it, they engage in this racist crap so often the Klan needs to make PETA an auxiliary chapter


"Once again, Black people are being pimped. You used us. You have used us enough.” then NAACP president of Greater New Haven chapters Scot X. Esdaile said at the opening of that 2005 exhibit there that raised the ire of African Americans in the area.

The historical oppression of African Americans disrespectfully being used repeatedly in PETA campaigns needs to cease and desist.   Until y'all permanently quit doing so, KFC will continue to get my money.

On that note, off to the Colonel for a three piece..