It's Independence Day For South Sudan! 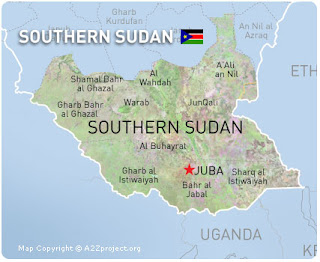 There were until a few moments ago 54 nations on the African continent, and now the Republic of South Sudan as of 12:01 AM their time becomes the latest one to be added to that list.   .

As you guessed by the name, it's the non-Muslim southern half of the nation of Sudan.  It's bordered by Ethiopia on the east, Kenya, Uganda, and Democratic Republic of the Congo to its south and the Central African Republic to the west.

For four decades it was embroiled in a long civil war with the ruling Islamic northern half of the country that left over 2 million people dead and others scattered around the globe.

It ended with the signing of a peace agreement in Nairobi, Kenya on January 9, 2005 and southern Sudan becoming an autonomous region for six years.  In January 2011 it held a referendum that voted overwhelmingly (99% in favor) to  establish an independent Republic of South Sudan.

The party gets started in the Texas-sized landlocked nation's capital of Juba with many of the world's nations including the United States, Canada and Sudan prepared to recognize it.   The United States delegation to the independence ceremony will be led by UN Ambassador Dr. Susan Rice. 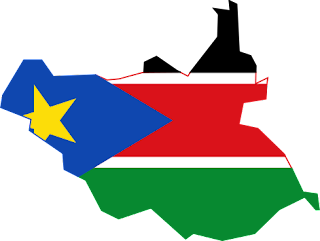 There will also be rapid United Nations action to admit it as its 193rd member nation, and they hope that expedited membership process will be completed by July 14.

But once the party is over, the new flag is raised, the new national anthem is sung and the parades are over through the streets of Juba and elsewhere in the country the Republic of South Sudan faces some serious growing pains that could make it difficult to build their new democratic nation.

Speaking of the new national anthem, just in case you were wondering, here are the words to it

Oh motherland
We arise raising flag with the guiding star
And sing songs of freedom with joy
For justice, liberty and prosperity
Shall forevermore reign 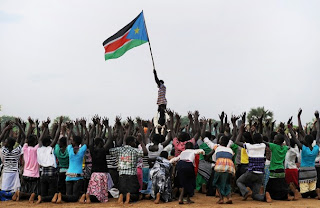 The 8 million residents of South Sudan and President Salva Kiir Mayardit face a dispute with Sudan over the Abyei region on its northern border, the fact that for now the oil that lies in South Sudan's oilfields can only reach world markets through pipelines that cross Sudan's territory, the nation has only 4000 km of paved road, 15% of the population is able to read, educational, health and other basic service delivery that needs improvement along with diversification of the predominately oil based economy.

They have nothing but time, a lot of help and people rooting for them to successfully tackle those issues.  For now the proud residents of the Republic of South Sudan will take the day to celebrate their hard won independence courtesy of the bullet and the ballot, and the rest of us on planet Earth get to watch and marvel at the process of the birth of a new nation.