Damn, Will Y'all Just Chill Out? 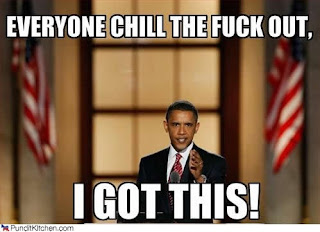 Y'all seem to have forgotten in your panicked vanilla scented rush to judgment and low expectations in this debt ceiling battle that the POTUS did graduate from Harvard Law, taught constitutional law and has accomplished more in his first term than the last occupant of the Oval Office did in eight years.

And he's done so while having to fight a hostile and openly racist Republican Party determined to make him a one term president, so called liberals still mad because he beat Hillary Clinton in the 2008 Democratic primary for the nomination and lukewarm GL peeps mad because he hasn't moved fast enough in their opinions to make same gender marriage the law of the land.

So chill and let President Obama do what he has to do to ensure he gets reelected next year while standing up for the things we Democrats consider important.