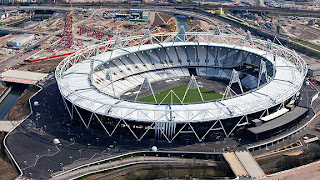 One year from today's date, we will witness the opening ceremonies for the 2012 Summer Olympics in London.  It will be the first time since 1948 that the city has hosted the Games and the third time it has done so.


After over 10,000 athletes parade into the Olympic stadium in alphabetical order with the Greeks going first and the host nation Great Britain last, we'll witness the torch lighting ceremony.   Ever since Barcelona used an archer to light the Olympic cauldron in 1992, it has been getting more and more creative with every passing Olympiad.   During the 2008 opening ceremonies for the Beijing Games Li Ning 'skywalked' to the Olympic cauldron.   How's London going to top that one?.

It will also be interesting to see what British Olympian will get the honor of lighting the torch.

And another question the trans community around the world will be asking is will this be the Games a trans athlete finally qualifies for their nation's Olympic team?

I've been an Olympic junkie ever since I watched the 1968 Grenoble Winter Olympics and later that summer the Mexico City Games.  I'm looking forward to seeing it take place not only in London, but watching some events like the tennis competition taking place at the All England Lawn Tennis and Croquet Club, or seeing the marathon run past world famous London landmarks and the soccer final in Wembley Stadium

But most of all I'm looking forward starting one year from today until August 12, 2012 to world class competition in 26 sports composed of the world's best athletes all battling for gold, silver and bronze medals.

And of course I want the USA grabbing its share of them.