The Air Marshal Has Arrived In St Louis!

After a flight from Hobby to.St Louis via Dallas that found me delayed at Love Field because of the arrival of the POTUS and FLOTUS for a major speech and having a bumpier than I liked trip from Dallas to St Louis, I'm now settled into my downtown Show Me State hotel room, have my computer set up and I`m calling Mom to let her know her eldest child/ made it,.

I'm now getting ready after unwinding from that interesting to say the least travel day to attend my second Netroots Nation conference and my first since 2012.

Well, I wasn't too disappointed in the Love Field delay.  I got to see Air Force One make a wide sweeping turn into the Love Field landing pattern and majestically land, trailed by two Secret Service security vehicles while taxiing over to the private aviation area at that airport,

And because of the ground stop, I had time to head over to the airport Whataburger location and destroy one for lunch.

I also discovered to my delight that St. Louis has a 46 mile two line (Red and Blue) Metrolink light rail line running from the airport to downtown and across the Mississippi River to the East St. Louis Illinois side of the St Louis metro area.

Hey hometown, how about we make the same thing happen that St Louis has done since 1993 and extend our MetroRail to IAH and Hobby?

I have been wanting to come back to Netroots since the 2012 NN event I attended in Providence, and the panel I participated in.  My schedule since 2012 hasn't allowed that to be possible until now.  It's also cool and ironic I'm  a mere 260 miles west of Louisville as I do so. 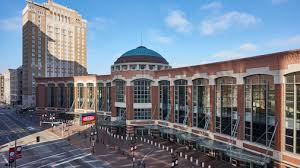 I'm here in St Louis on Tuesday because at the St Louis America's Convention Center tomorrow there's a #NN16 pre-conference event happening in which the organizers of it wanted me in the room as part of it.  ,

Looking forward to seeing what transpires, and I'll find out if the stuff we discuss tomorrow starting at 9 AM CDT is on or off the record.

At any rate, will do my best to tweet, comment on my FB page and write about what's happening while I'm there at Netroots Nation repping my community, my hometown and the organizations whose boards I sit on.

In the meantime, as you watch for my commentary, you can also check out the Netroots Nation website for webcasts, stories and blog posts, and follow the #NN16 hashtag on Twitter just for starters.

I also have a Saturday panel discussion I'll be participating in at 1:30 PM entitled #TalkingWhileBlack: Recognizing and Confronting Racism In The LGBTQ Community.  Should be a fun conversation with me Faith Cheltenham and Ashton Woods being just some of the peeps on that panel.

I'm also planning to pop my head into non-LGBTQ spaces and making my unapologetic Black trans voice heard, and may swing by the radio podcast area before I'm done and heading back to Texas

Perusing the schedule overview now and trying to figure out what seminars and panels I'm going to attend when the conference starts Thursday, and hope #NN16 is as positive an experience for me as the 2012 edition was.

We'll see how that plays out in a few hours.
Posted by Monica Roberts at 5:00 PM