"If that were happening to your community and it was your kids being depressingly killed every year by police that don't look like them or even live in their neighborhoods, would you be sitting silently on your hands about that injustice?"  TransGriot, August 14, 2014
We have had in the last week three Black men killed by police officers in Baton Rouge, LA (Alton Sterling), a St Paul, MN suburb (Philando Castile) and in my hometown Saturday (Alva Braziel) mere hours after a Black Lives Matter rally that sought to bring down tensions between HPD and our citizens.

It's not like Death by Cop isn't a new problem for our community or the community's internal response to it.  One of the things I was told in 1978 after I'd passed my written test for my drivers permit by my parents was "Congratulations!  Now this is what you don't do in a traffic stop."

And two years later I violated one of those rules in a Highland Park, TX traffic stop because I was pissed off about being jacked with by the Highland Park PD for the crime of looking at Christmas lights while Black with my cousins.

Three years later I was dealing with the same crap again outside a then popular SW Houston nightclub called the Tyler Rose because my then homeboy's tail light on his car picked that moment to go out with two white male HPD cops in the mood to mess with some Black people.on our bumper at the Fondren and West Bellfort traffic light.

And once again I got snarky when I and my friends got asked why we all had South Park addresses on our drivers licenses when he and his partner saw us pulling out of the Tyler Rose parking lot.

My response to the question?  "Since when did it become a crime for people who live in South Park to be in Southwest Houston?"

I was fortunate that neither episode resulted in me or my friends dying because of my big injustice hating mouth, but that was the 80's.   Now it seems as though in the 2K16 white cops have a problem with Black people be they male or female no matter their age.   They are 'in fear of their life' so much when they encounter us they are straight up killing us and to our disgust not getting punished for it. 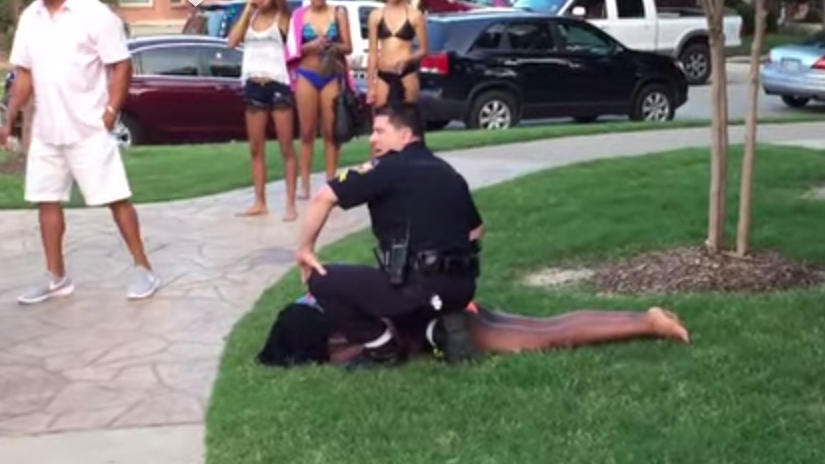 Black women not only have to be concerned during their interactions with police about getting shot to death or brutalized, they also have to be worried about being sexually assaulted or violently body cavity searched.

That crap needs to stop.  Today.

We are tired of having our humanity dismissed, ignored and being killed for BS reasons by police officers that are supposed to protect and serve our communities, and not getting punished for it. That's a major reason why you're seeing peaceful (for now) protests all across the country.

But if things don 't change for the better soon in terms of the longtime historically negative relationship between Black people and white police officers, then all bets may be off about those protests staying that way.
Posted by Monica Roberts at 12:00 PM