Leaving On A Jet Plane To St Louis!

It's ironic than in the nearly nine years I lived in Louisville, I was only a mere 3.5 hour drive away from St. Louis, but the closest I ever got to hitting I-64 west toward it was Evansville, IN for the wedding of a friend.

The next closest opportunity was in 2012 when I was headed to New York for my GLAAD POC media training, and my through flight to LGA stopped in St. Louis on the way there.  It was the same aircraft, so I happily moved myself and my bags closer to the front of the plane before we boarded the passengers waiting to get on in St Louis. 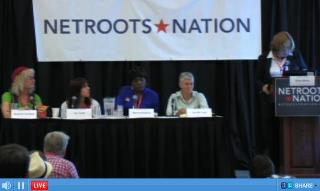 Yep, people, I'll be at the 2016 Netroots Nation through Sunday, and my jet plane takes me through Dallas Love Field on the way to St. Louis.   Hopefully I have a chance and time to hit the Whataburger at Love Field while I'm laying over there for my connecting flight at 12:30 PM and both are on time.

You TransGriot readers know the convention drill.  Sometimes I may be deep in thought as I'm wandering the convention halls and may not recognize you right away, or I may be engaged in conversation with a lot of people.  In either scenario, don't be shy, just say hi when you see me.

On that note, time for me to get some beauty sleep for this travel day   My alarm is set for 6 AM, and it will be here before you know it.
.
Posted by Monica Roberts at 12:00 AM