2016 Williams Watch- In The Wimbledon Semis! World number one Serena won her Centre Court quarterfinal match with Russia's Anastasia Pavlyuchenkova in straight sets 6-4, 6-4 to punch her ticket to the semifinals against another Russian in Elena Vesnina. 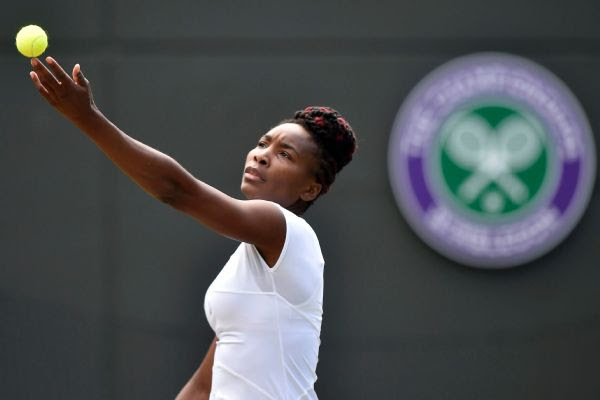 Meanwhile over on No. 1 Court, eighth seeded Venus was pushed a bit and was down 2-5 in the first set tiebreaker, but regrouped and won in straight sets against Kazakhstan's Yaroslava Shvedova 7-6 (7-5), 6-2 to make it to her semifinal match with number five seed Angelique Kerber

It was the first time since the 2010 US Open that she has made it to a Grand Slam semifinal,

We'll see on Thursday if both Williams sisters make it to the ladies singles final on Saturday.

They are also still in contention for their first 'Williams'-don doubles crown since 2012, and dispatched the Czech duo of Andrea Hlavackova and Lucie Hradecka 6-4, 6-3 in their third round ladies doubles match

They will face in the ladies doubles quarters the winner of the Barbora Strycova/Michaella Krajicek - Elena Vesnina/Ekaterina Makarova match.

TransGriot Update:  They will face in the Wimbledon doubles quarters the number four seeded Russian duo of Elena Vesnina and Ekaterina Makarova.