Ever since World War II ended in 1945, the infamous Auschwitz death camp in which 2 million people were sent to die has been a museum to our seemingly limitless ability as humans to be cruel to each other.

The world was stunned to hear that the 5 meter (16 foot) 'Arbeit Macht Frei' sign that curved over the entrance gates to the camp was stolen in a brazen pre dawn theft Friday.

Auschwitz has also been a favorite target of Holocaust deniers who try to claim the 'Final Solution' never happened. 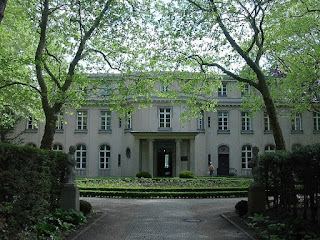 Um, check the Nazi photographic evidence of the Einsatzgruppen doing their grisly work in newly conquered Soviet territory and later executing the decisions made at the January 20, 1942 Wannsee Conference that formulated the murderous solutions to the 'Judenfrage'.

As outrage over the theft poured in from all over the world, Polish authorities have begun an extensive manhunt to capture the wastes of DNA who executed this crime.

"The fact is that the 'Arbeit Macht Frei' sign has become the defining symbol of the Holocaust, because everyone knew that this was not a place where work makes you free, but it was the place where millions of men, women, and children were brought for one purpose only — to be murdered," said Rabbi Marvin Hier, the Simon Wiesenthal Center's founder and dean.

The Center is a leading Jewish human rights group, and has urged Poland to intensify its investigation and bring the thieves to justice.

The camp was liberated by Soviet army troops on January 27, 1945. Polish officials plan to mark the 65th anniversary of that liberation next month with somber ceremonies at the site.

I hope when Polish authorities find and convict the thieves for doing so, their punishment will be to not only clean every square millimeter of the death camp, but be put to work helping to restore it.
Posted by Monica Roberts at 8:30 PM