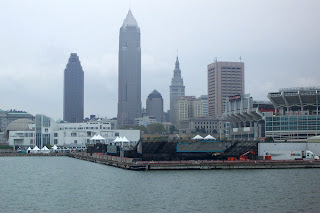 I know Zoe and the rest of my transpeeps in Cleveland are on Cloud Nine today after their city council passed a transgender civil rights law by a unanimous 21-0 vote.

The law bans discrimination in the areas of housing, employment and public accommodations on the basis of gender identity. Cleveland's anti-discrimination law already includes sexual orientation, age, race and religion.

What might prove problematic is a last-minute amendment that excludes shared showers, locker rooms and restrooms.

The legislation was sponsored by openly gay and outgoing Council member Joe Santiago, who introduced the bill in August. Unfortunately Santiago lost his bid for a second term in September.

Cleveland now joins other Ohio cities such as Columbus, Cincinnati, Toledo, Dayton, and the Cleveland suburbs of Cleveland Heights and Shaker Heights in protecting its transgender residents against discrimination.
Posted by Monica Roberts at 11:30 AM

this is exciting, but does it include prisons, homeless shelters, rehabilitation centers, etc? or do those operate under a separate set of rules. . ?