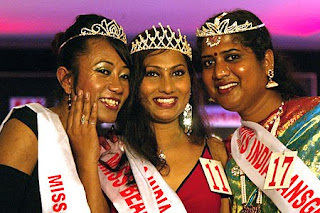 There have been some recent groundbreaking events taking place for the GLBT community in India that have broken down cultural barriers.

In July the Delhi High Court decriminalized gay sex between consenting adults by declaring a colonial-era ban on homosexuality unconstitutional.

In November eunuchs won the right in a long standing campaign to be listed as 'others', distinct from males and females, on electoral rolls and voter identity cards.

In the wake of the changes in Indian society, the Indian Community Welfare Organization (ICWO), organized and hosted the first annual pageant for Indian transwomen on December 19. 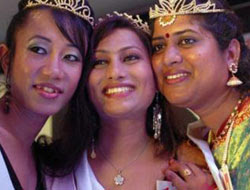 So why a pageant? ICWO Founding Secretary A.J. Hariharan told AFP, "We had a meeting of the transgender community some months ago where we discussed various events to bring community members into society,"

After rejecting several proposals including sporting events, "everyone unanimously supported the idea of a national-level beauty pageant," he said.

"We thought it would create an opportunity for the transgender community to showcase their skills, create a platform to address the problems they face - discrimination, marginalization and misconception."

The winner was Karina Shaline, a 25-year-old model from Mumbai. Romi, a 23 year old beautician from the northeastern state of Manipur, was second with local favorite and dance instructor Padmini, 25, grabbing third place.
Posted by Monica Roberts at 11:01 PM