We're probably a long way off before the scenes of commercial space travel you remember from the movie 2001 A Space Odyssey or Battlestar Galactica become a reality, but we came one step closer to it today.

"We want this program to be a whole new beginning in a commercial era of space travel," said British billionaire Sir Richard Branson.

He has partnered with aircraft designer Burt Rutan to form Virgin Galactic with the goal of creating an aircraft capable of making space travel as routine as commercial aviation flight. 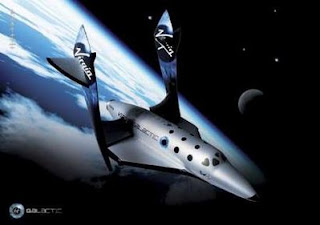 SpaceShipTwo is based on Rutan's design of a stubby white prototype called SpaceShipOne. In 2004, the Rutan designed craft captured the $10 million Ansari X Prize by becoming the first privately manned craft to reach space.

Engineers from Rutan's Scaled Composites LLC have been laboring in a Mojave Desert hangar to commercialize the SpaceShipTwo prototype in heavy secrecy. They are hoping to begin the flights in 2011 after rigorous safety testing.

The first passengers on board the maiden flight of SpaceShipTwo will be Branson, his family and Rutan. 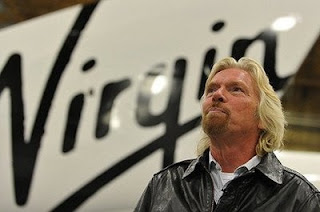 Branson is hoping to tap into a potentially lucrative market for would be space travelers. Several people have shelled out millions for rides on Russian rockets to the International Space Station, and according to Virgin Galactic some 300 clients have paid the $200,000 ticket price or placed a deposit.

"NASA spent billions upon billions of dollars on space travel and has only managed to send 480 people," Branson said. "We're literally hoping to send thousands of people into space over the next couple of years. We want to make sure that we build a spaceship that is 100 percent safe."

I wouldn't mind taking that ultimate plane ride either.
Posted by Monica Roberts at 12:56 PM