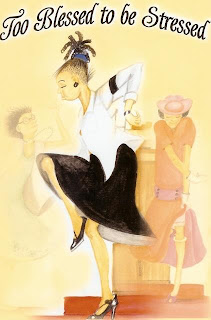 I was baptized at my home church on August 2, 1972. Ever since that day, just like other African-Americans my faith has been an important cornerstone of my life.

I have strived to as much as humanly possible live my life and treat others that I come in contact with as my Christian beliefs dictate that I should. While I haven't been 100% compliant in living up to that lofty standard, I continue to diligently work toward trying to achieve it. So I fail to understand why peeps who call themselves 'Christian' would harbor so much vitriolic hatred for GLBT peeps that they would do whatever it takes to make our lives miserable.

I'll deal with that in a future post. Job One of this post is to help transpeeeps and others understand that being transgender and Christian are not mutually exclusive.

How many times did you say the Transgender Child's Prayer growing up? You didn't know there was one? It's short, sweet and is a one line sentence usually tacked onto the end of the Lord's Prayer. Sometimes it's said as a stand alone one.

Lord, please let me wake up tomorrow and be a (girl/boy) forever.

I said that one more than a few times myself.

Let's fast forward into adulthood. Being transgender is an exercise in faith. You have the knowledge and conviction that you're gender and body doesn't match. You believe that somehow, someday and someway you will make body and mind match up irregardless of what the world says, thinks or does to you. You will also take steps to make that a reality. The saying 'The Lord helps those who help themselves' definitely applies to transpeeps.

That rock solid conviction that you have as a transperson is the same level of conviction that you need to have as a Christian. Just as you feel the euphoria of finally living in your birth gender, you feel the same calming, peaceful effect when you accept Him as your Lord and Saviour. You become a better person as you learn to trust in the Lord, study the Word or attend chruch on a regular basis. (unless you join the Traditional Values Coalition or the Hi Impact Leadership Coalition)

I remember when I reached a point in 1993 when I was fed up and ready to start transition. I was hesitant that I was doing the right thing and prayed for signs that I was supposed to be female.

Boy did they come fast and furiously after that. 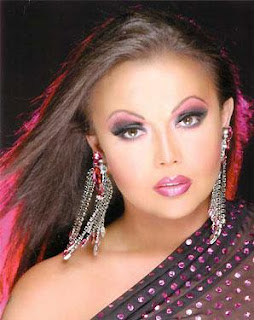 One day I randomly opened my Bible and found myself reading Matthew 19:12. I work a San Antonio flight and see female illusionist Maya Douglas on it. I work a New York flight two days later and see a girl returning from having her facial feminization surgery with Dr. Ousterhout in San Francisco. I'd been having problems reconciling my height with the gender issue. I see one girl I knew from hanging out in Montrose proudly strutting her 6'4" frame through downtown Houston streets in daylight hours a few days later. I get home and discover I have a call on my answering machine from my fave cousin Karen inviting me to come out to Los Angeles for a visit. 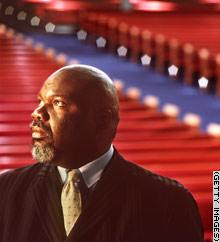 After I arrived in LA we ended up at a church watching TD Jakes speak. One part of his hour long sermon struck me like a thunderbolt. I recall him saying. "There are times when you will be placed on a path in which your friends and others will revile you, your family will turn away and you won't even understand it. Keep the faith and God will guide you through it." It was like he was speaking directly to me about the emotional tug of war I was having about transition.

But it took me having a recurring dream for three consecutive nights before I finally made that appointment at the clinic that started me on the road to transition. As Christine Daniels has mentioned in her blog, I've also discovered that my spirituality and faith has been enhanced by transition, not diminshed by it no matter what our misguided detractors have to say.

There have been times during my transition when I've had setbacks, trials and tribulations. I was frustrated, felt alone and wondered if I had the strength to keep pushing forward with my desires to be the best person I could be. My faith played a major role in helping me get off the canvas, stop feeling sorry for myself, dust myself off and get back in the game of life.

TD Jakes was also right about keeping the faith. It's definitely led to a better quality of life. The amazing part about it is that I don't think God is finished with me yet.
Posted by Monica Roberts at 1:56 PM

That's so cool! I have so much respect for transgender people. A couple of my friends are trans and I can't imagine what they've had to go through totally re-inventing themselves.

My "aunt" Dharma mentioned your blog and told me how totally cool you are! And she was right! Thanks for sharing these important stories.

This is a beautiful testimony. As a transgender and cross dresser, I know that God loves us unconditionally.
Thank you so much for sharing.