Back To The Hill-The Lobby Day Report 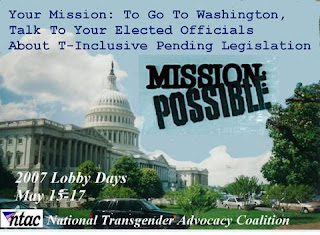 Got back yesterday evening after spending two days in Washington DC taking part in NTAC's portion of Transgender Lobby Week.

AC, Dawn and I shoved off from Louisville at 6:30 AM Tuesday morning. We arrived in Washington DC about 4:30 PM after driving eastward across Kentucky, West Virginia and Maryland. Had a lobby training session at IFGE headquarters a few hours after we arrived at our Silver Spring, MD area hotel. We were also stunned to hear after we flipped the XM to the Randi Rhodes Show about Jerry Falwell's death followed by Yolanda King's the next day. We also found it interesting that the Newsweek article on gender was published just before we left for DC.

At IFGE headquarters I was reunited with my fellow Houstonians Vanessa Edwards-Foster, Jackie Thorne and Josephine Tittsworth along with a few other peeps in the community. Dawn, Vanessa and I had a blast acting out various lobbying scenarios and listening to AC's briefing laying out our strategy for the upcoming two days of lobbying. We were concentrating on HR 1592, the Hate Crimes Bill which passed the House before we arrived, HR 2015, The Employment Non-Discrimination Act or ENDA for short, and HR 1117, the Real ID Repeal Act that removes Title II from it. It's an issue of major importance to transpeeps because Real ID reverts our gender codes on licenses back to birth gender irregardless of how long we've been transitioned.

My task along with Dawn's was to hit as many of the 43 Congressional Black Caucus offices as we could visit, with priority on the CBC leadership, those holding committee chairmanships and subcommittee chairmanships. The other lobbyists were also told not to hit a CBC office without us. Too many times over the years we've had instances of non-African Americans hitting CBC offices and saying stupid crap like African-American transpeople don't exist. NTAC also targeted other key members of the House and Senate delegations as well. While we didn't have the numbers or star power that the NCTE peeps had for their one day event, we had far more experienced and politically savvy people who'd done multiple lobby days to pair our newbies up with.

Over the next two days (Wednesday and Thursday) we hit many of the CBC offices and a few others in the House and Senate. We had substantive conversations with many staffers concerning the issues important to transpeeps. I even got to take a photo with my birth state senator Kay Bailey Hutchinson (R-TX) along with Vanessa and Jo. We also talked to Senator Hutchinson's staffers about the reason I'm living in Louisville now along with a few other issues. 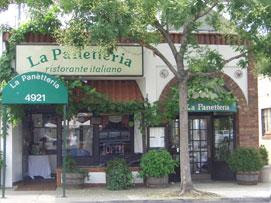 It wasn't all hard work. We did get to make our traditional lobbying pilgrimage to the place where NTAC was born in 1999, Bethesda's La Panetteria Italian restaurant. We also chowed down at a Tex-Mex styled place in Silver Spring. We spent a lot of time in between lobby appointments and drop ins talking to various peeps on Capitol Hill and each other. AC and I also hopped into the van and took a mini-tour of DC. We drove past the Howard U campus, parts of downtown, Chinatown, the Smithsonian, the Spy Museum and The Mall. They've also finally broken ground for the construction of the Martin Luther King Memorial as well and I'm looking forward to seeing that when it's completed.

I also noted the major change that has happened since my 1999 visit to Capitol Hill besides the new Visitor's Center under construction: the ramped up security. Capitol Police armed with M-16's patrolling the grounds and armed Capitol police officers at the checkpoints and crash barriers. If you're riding the subway repetitive messages remind you to immediately report to Metro Transit police if you see someone leave something behind on a train or in the stations.

I got a firsthand taste of why former rep Cynthia McKinney (D-GA) went off on the Capitol Police officers last year. I had several packets in hand as I entered the security checkpoint in the Longworth Building and I was held up at security. After they took down my name and had me identify who I was with I was told moments later I'd have to throw them away.

When I asked when this policy had been changed and wanted to know under what statute they had the authority to order that the officer produced a white folder. I was pissed off after having to not only throw those packets away but embarrassed about being profiled like that in front of a bunch of white peeps also trying to enter the building. The thing that also upset me was that it was an African-American officer jacking me up at security. He apologized for it and I told him he was only doing his job but it didn't get my lobbying day off to a great start.

I was just calming down from the leftover pissivity I had about being profiled at the checkpoint when Dawn came back from her forays in two offices and reported that the senate version of the ENDA bill Senator Ted Kennedy (D-MA) was about to introduce didn't include transpeople. That caused us to immediately shift our Senate talking points to deal with this possibility. We'll see in a few days whether the Kennedy bill (S.717) gets introduced without the House ENDA bill language.

Despite the bull feces at the checkpoint, I did enjoy my trip back to the Hill even though I didn't get to see my own congressmember John Yarmuth (D-KY). I'll have to rectify that on my next trip. I hope that while I was in the various offices the staffers and members saw me as just another fellow American exercising her constitutional rights. I also hope that the first timers who were lobbying with us enjoyed the experience and reveled in the self-esteem boost that it gives you.

Now I'm just finishing up the rest of my lobbying reports and waiting for my photo to hit the mailbox from Sen. Hutchinson's office.
Posted by Monica Roberts at 9:46 AM

It was a real pleasure and learning experience to meet everyone and be able to lobby with all of you. Too bad I missed La Panetteria, but I am looking forward to it next time!