The Derby parties are in full swing here in Da Ville along with all the other events around town that comprise the Kentucky Derby Festival. Celebrity sightings are on the rise around town and even Queen Elizabeth II will be here in the Bluegrass State to watch one of her horses run. It's capped off by "Ladies Day at the Races", the Kentucky Oaks on May 4 and the "Fastest Two Minutes in Sports" on May 5.

Jockeys were the elite African-American athletes of the 19th century. The best was Isaac Murphy. He was the first jockey to win three Kentucky Derbys (1884, 1890, 1891) and did it in record setting style. Murphy also holds the distinctions of not only being the first jockey to win consecutive Derbys, but riding the only African-American owned horse to date that has won the Derby, Dudley Allen's Kingman in 1891.

Before his career was cut short by his untimely death from pneumonia at 34, Murphy won 628 of his 1,412 starts, an astonishing 44% of all the races he rode in. He was the first inductee into the Jockey Hall of Fame when it was established in 1955. His record hasn't come close to being matched by modern day greats as of yet. Hall of Fame jockey Eddie Arcaro said of Murphy's record: "There is no chance that his record of winning will ever be surpassed. Willie Simms is the other African-American jockey that has been inducted into the Hall of Fame. He is the only African-American jockey to win all the races comprising the Triple Crown (The Derby, the Preakness and the Belmont Stakes)

Jimmy Wakefield was the last African-American jockey to win the Derby in 1901-1902 and due to lack of opportunity in the United States ended up moving to Europe in 1903 to continue his lucrative career. Wakefield became fluent in several languages, rode for Czar Nicholas II of Russia and had over 2300 wins to his credit before he retired from the sport at age 48 and purchased a horse farm outside Paris. When France was overrun by the Germans in 1940 he and his family escaped to the United States in 1943. When World War II ended he spent a few years in the States before returning to his beloved Maisons-Lafitte farm where he died in 1974.

So what factors combined to change the horse racing era of African-American excellence? The major ones was White resentment of the Black dominance in a sport that was considered in the late 19th century the national pastime and the fact that the jockeys were making salaries three times what most whites were earning in that time period. Klan intimidation, collusion to deny Black jockeys and trainers work and access to US tracks were factors as well. In addition the mass migration of African-Americans from the farms of the South to northern cities combined to ethnically cleanse horse racing of its African-American presence by the turn of the early 20th century. 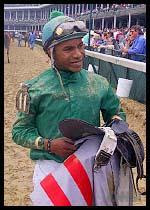 It would be 79 years before another African-American jockey was present to ride at the Derby. Lafayette, LA native Marlon St. Julien, a successful jockey in the Texas and Chicago racing circuits was tapped to ride Curule in the 2000 Derby. "I think we're here to accomplish something, not just to be here," St. Julien said in a CNNSI interview. "I was put here to be a race rider and I'm going to be the best that I can be." Curule finished seventh in that Derby. St. Julien also made history by becoming the first African-American jockey to ride in the Kentucky Oaks in 103 years when he guided Zoftig to a fifth place finish.

St. Julien is part of a return of African-Americans to their horse racing heritage. MC Hammer's Oaktown Stable owns the filly Lite Light which won the 1991 Kentucky Oaks. Motown's Berry Gordy has been moderately successful with his horses. St. Julien's goal is to ride Breeder's Cup and Triple Crown winners and has eagerly embraced the legacy of the pioneer jockeys. Trainer James Jackson has 2000 career wins to his credit and in 2005 became the first African-American trainer to saddle a Kentucky Oaks starter when Gallant Secret galloped to a third place finish inthe Run For the Lillies.

Our departed horse racing pioneers would be happy to see us back in the Sport of Kings to win, place and show once again. It's time to start building on their legacy of excellence and reclaim it in this century.
Posted by Monica Roberts at 1:19 PM

found your post..very interesting..maybe you can help me get started or at least pointed in the right directions..i would like to get more involved with horses any information would be helpful.look forward to hearing from you..jeff :-) groojb@yahoo.com

You may want to to try the National Horse Racing Association's website as a starting point and go from there.