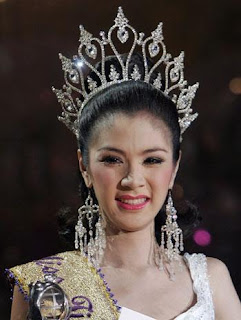 90 miles southeast of Bangkok lies the resort town of Pattaya, home to of one the first and more famous all-transgender cabaret shows in Thailand, Miss Tiffany's and its rival the Alcazar.

The transgender cabaret shows are popular with Asian and western tourists and regularly pack the 2000 seat auditoriums at both venues to see the Vegas and Parisian styled revues.

Since 1998 they have held a transgender beauty pageant there that draws contestants from all over Thailand and is a fundraiser for Thailand's Royal Sponsored AIDS Foundation. In addition part of its mission is to promote acceptance of transgender people worldwide. 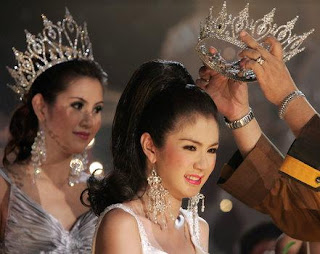 The Miss Tiffamy's Universe Pageant has become so popular it is covered not only on local televison but has been mentioned on the BBC, CNN and other world newsgathering organizations. The pageant is limited to Thai contestants. In addition to offering the winner a 100,000 baht cash prize ($2,700 USD), a diamond studded crown, a trophy and a Mercedes-Benz car the Miss Tiffany winner is Thailand's representative in the Miss International Queen pageant open to transwomen around the globe that Thailand sometimesplays host to. 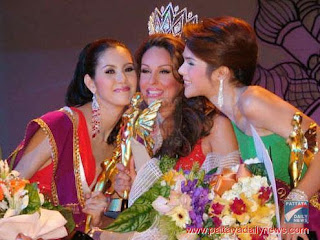 My homegirl Domanique Shappelle took home The Most Talented Title in the 2006 Miss International Queen pageant that was hosted in Thailand October 29 but my fellow Texan Erica Andrews, representing Mexico won it to the surprise of many Thai observers, who say that they have the prettiest transwomen on the planet. 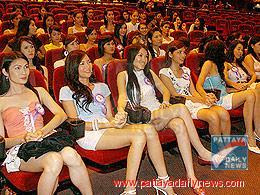 The pageant has come a long way. The inaugural one couldn't even get local TV time while the 10th anniversary version, which was held earler this month had the finals televised live across Thailand and drew an estimated 25 million viewers.

It also received two major publicity boosts. One was courtesy of the now defunct Asiaweek newsmagazine. It asked its readers to judge who was prettier – Miss Thailand Universe 1999 Apisamai Srirangsan (a biowoman) or Miss Tiffany’s Universe 1999 Pattareeya Siringamwong. Surprisingly, the readers chose the Miss Tiffany's winner. The 1999 pageant also managed to get local TV coverage which was then picked up as a CNN newsfeed, catapulting the then unknown pageant into an international news event. 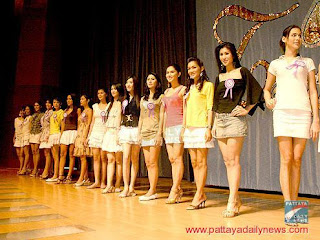 The Miss Tiffany's Universe title is considered a prestigious one among Thai transwomen and the competition for it is fierce. 60 girls showed up on May 7 vying to make the round of 30 for the nationally televised finals. 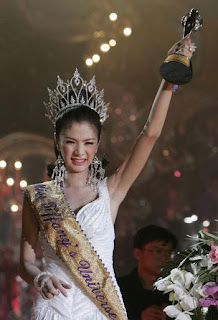 Thanyaras Jiraphatphakorn was crowned the new Miss Tiffany Universe on May 11. She answered in reponse to a question asked during the interview phase whether it was possible for a 'katoey' or 'ladyboy' to become a politician, "Sure, it is. In the future, there might be a prime minister who is a ladyboy."

However, she added that much depends on whether Thai society can change their negative views of katoeys.

"Society should judge people by what they do rather than considering what sex they are," said Thanyaras.

Amen to that and congratulations.
Posted by Monica Roberts at 1:33 PM

Wow! They are so beautiful! Must be something in the water over there.

Kari,
yes it is. It's called early access to female hormones