UCLA Research Suggests That Sexual Identity Is 'Hard-Wired' Before Birth 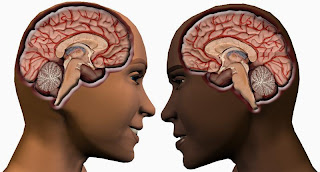 Refuting 30 years of scientific theory that solely credits hormones for brain development, UCLA scientists have identified 54 genes that may explain the different organization of male and female brains.

Published in the October edition of the journal Molecular Brain Research, the UCLA discovery suggests that sexual identity is hard-wired into the brain before birth and may offer physicians a tool for gender assignment of babies born with ambiguous genitalia.

"Our findings may help answer an important question - why do we feel male or female?" explained Dr. Eric Vilain, assistant professor of human genetics and urology at the David Geffen School of Medicine at UCLA and a pediatrician at UCLA's Mattel Children's Hospital. "Sexual identity is rooted in every person's biology before birth and springs from a variation in our individual genome."

Since the 1970s, scientists have believed that estrogen and testosterone were wholly responsible for sexually organizing the brain. In other words, a fetal brain simply needed to produce more testosterone to become male. Recent evidence, however, indicates that hormones cannot explain everything about the sexual differences between male and female brains.

"We didn't expect to find genetic differences between the sexes' brains," admitted Vilain. "But we discovered that the male and female brains differed in many measurable ways, including anatomy and function."

In one intriguing example, the two hemispheres of the brain appeared more symmetrical in females than in males. According to Vilain, the symmetry may improve communication between both sides of the brain, leading to enhanced verbal expressiveness in females.

"This anatomical difference may explain why women can sometimes articulate their feelings more easily than men," he said.

Overall, the UCLA team's findings counter the theory that only hormones are responsible for organizing the brain.

"Our research implies that genes account for some of the differences between male and female brains," noted Vilain. "We believe that one's genes, hormones and environment exert a combined influence on sexual brain development."

The scientists will pursue further studies to distinguish specific roles in the brain's sexual maturation for each of the 54 different genes they identified. What their research reveals may provide insight into how the brain determines gender identity.

"Our findings may explain why we feel male or female, regardless of our actual anatomy," said Vilain. "These discoveries lend credence to the idea that being transgender --- feeling that one has been born into the body of the wrong sex -- is a state of mind.

"From previous studies, we know that transgender persons possess normal hormonal levels," he added. "Their gender identity likely will be explained by some of the genes we discovered."

Vilain's findings on the brain's sex genes may also ease the plight of parents of intersex infants, and help their physicians to assign gender with greater accuracy. Mild cases of malformed genitalia occur in 1 percent of all births - about 3 million cases. More severe cases - where doctors can't inform parents whether they had a boy or girl -- occur in one in 3,000 births.

"If physicians could predict the gender of newborns with ambiguous genitalia at birth, we would make less mistakes in gender assignment," said Vilain.

Lastly, Vilain proposes that the UCLA findings may help to explain the origin of homosexuality.

"It's quite possible that sexual identity and physical attraction is 'hard-wired' by the brain," he noted. "If we accept this concept, we must dismiss the myth that homosexuality is a 'choice' and examine our civil legal system accordingly."

The UCLA study was supported by the National Institute of Child Health and Human Development, the National Science Foundation and with start-up funds from the UCLA Department of Urology. Vilain's co-authors included Phoebe Dewing, Steve Horvath and Tao Shi, all of UCLA.
Posted by Monica Roberts at 9:05 AM

Kudos for bringing this forward. Very interesting. However, while this is intriguing research, I wouldn't be quick to say that it's correct in its conclusions. First, there is considerable controversy on the question of whether male and female brain structures are really different. There are some claims about the thickness of the cortex, the size of the limbic nucleus and the corpus callosum, etc., but no one has yet definitively shown that the differences between the sexes are larger than the differences within each sex. Therefore, the alleged genetic differences here may turn out to be based on some other factor than sex. Furthermore, the socio-legal argument that this research, if correct, compels the conclusion that the law must recognize transgender identity, is logically flawed. I agree with the point -- transgender identity should be legally recognized -- but not because of this early research. There is a much better justification: The UN Declaration of Human Rights and the US Constitution (and any just legal system) value my right to self-determination and self-identification because of the respect due me as a human being. The argument that genetics is the foundation for my rights is a double-edged sword, because it also justifies the argument that my identity is a birth defect that can be cured. Scientists should keep their conclusions close to the data, and not go wandering off into political minefields where they are out of their depth.

Dr. Weiss,
Two of the arguments that our opponents have been using with the general public to deny transgender legal coverage is the 'its a choice' and 'it's elective surgery'.

ANY medical research that shows that being transgender is NOT a choice blows those fallacious arguments to smithereens and helps us get that much closer to full civil rights.

I agree with you, Monica. I also want to add that I hope it isn't used as justification for continuing to perform genital surgery on intersexed infants. No person should be subjected to medically unnecessary surgery without his or her consent. This sort of thing should wait until the child is old enough to make an informed decision about his/her own body.

Wolfgang,
I definitely agree with you concering the point about surgery on intersexed infants. I agree with you that parents of intersexed children should wait a few years to see what gender characteristics and gender identity cues come from their child before doing surgery on them.

I have one intersexed friend who is still upset about the fact that she was born with fully developed female reproductive organs amd an elongated penile structure.

Her parents chose to raise her as a boy, had those surgically removed and her vaginal opening sewed shut.

When the inevitable feminine hardwiring kicked in and she transitioned, she discovered after perusing her medical records what had been done to her at birth and was livid.