Someone in a spasm of creativity decided to do a parody of the Caitlyn Jenner Vanity Fair cover in which they stuck Wendy Williams on a fictional EBONY magazine cover with the caption 'Call Me Walter'.

While I have major issues with Wendy Williams problematically using transphobia in her rise to shock-jock radio and television fame, insultingly misgendering Viola Davis in 2012 for daring to wear natural hair on the Oscar red carpet, and another incident in which she repeated debunked stereotypes about trans athletes on her talk show,  at the same time I've also had a major problem with people, and especially the Black gossip blogosphere misgendering her. 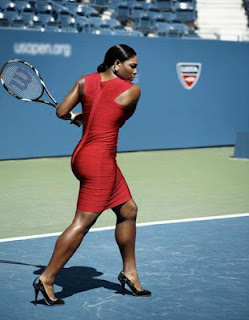 The reason I have such a problem with it is because of the 'Black Unwoman Meme, the femininity of Black women has been under attack for four centuries by whiteness and white supremacy.   It infuriates me when Black people participate in the demonization of our own women.

Transmisogyny is not just aimed at Black trans women, it is also aimed at any cis Black woman deemed to not measure up to subjective beauty standards not designed with us in mind.

Misgendering is one of the methods that critics have used to attack any Black woman they don't like, with the most recent examples of that type of misgendering being Venus and Serena Williams, Brittney Griner, Fantasia, Ciara and First Lady Michelle Obama.

If you didn't find the attacks on the FLOTUS' femininity by Joan Rivers and right wingers humorous, then for the sake of consistency neither are those attacks warranted or humorous when they are aimed at Wendy Williams or any other Black woman.