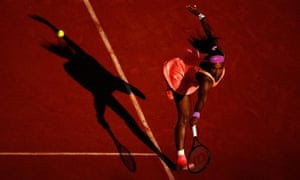 The French Open women's semifinals were earlier today, and Serena was playing Switzerland's Timea Bacsinszky for a spot in the finals.against Lucie Safarova.

She was hoping to avoid a troubling pattern in this French Open tournament in which she has dropped the first set, but roared back to win the next two and the match.

With her quarterfinal straight set dispatching of Sara Errani, it looked like she was back to being the brutally efficient and dominant player she usually becomes when a title is in her reach.

What people didn't know before this match was that Serena was battling a nasty flu bug, and it showed in the first set that she dropped 4-6 to Bacsinszky.  But trailing 2-3 in the second set, coughing and struggling during the changeovers, Serena summoned once more that tremendous will to win that set her apart from most of the women on the tour and kicked up her game another level..

She said in a post match interview with Darren Cahill:

"I don’t think I’ve ever been this sick – I didn’t expect to win that, and I can’t believe I won.  I got the flu after my third-round match and I haven’t been getting better. Hopefully this is the worst and I’ll get better.  I really thought I was going to lose, and I thought: if I’m going to lose, I might as well go for winners. I was so tired, and I just fought for every point." 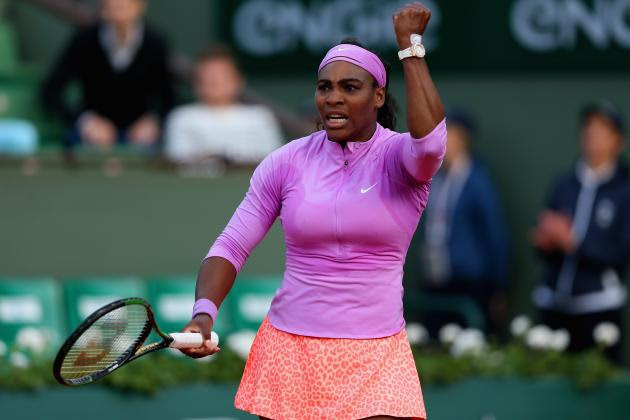 Serena may have been ill, but the only one who is probably sick at the lost opportunity to knock her out of the French Open and get to the final is Timea Bacsinszky.

Serena will have a day off to rest, and will be playing for all this history on Saturday.   If he pulls this off, it will be her third career French Open title and her 20th career Grand Slam title.   That will put her only two behind tying Steffi Graf..

Speaking of two, she will be halfway to a calendar year Grand Slam, with her fave tournaments 'Williams'don and the US Open coming up.on the Grand Slam calendar.    It will also be the third straight Grand Slam she has won since the 2014 US Open.and put her one away from a 'Serena Slam'

Speedy recovery Serena and hope you make that happen.
Posted by Monica Roberts at 2:00 PM