The Confederate Flag Represents A Heritage Of Hate 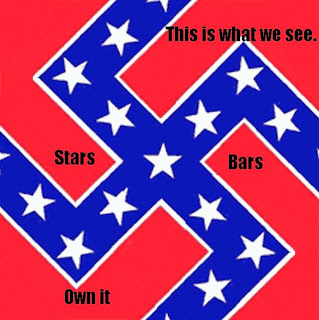 Been keeping up with the terrorist attack in Charleston, SC that led to the deaths of nine people at Mother Emanuel AME Church by white supremacist Dylann Roof.

It has been interesting to see how fast the conservafool media has been quick to revoke his white male card and try to disassociate themselves from the fact he was one of theirs, weaned on FOX Noise and other anti-Black hate speech.

First they tried to avoid even calling it a terrorist attack, but had to drop that attempted talking point when his anti-Black manifesto came out.

Then it was the conservafool media trying to paint Roof as a `lone wolf`, `disturbed`,`mentally ill`, et cetera.

Nope, he`s a ` Real American` and all yours.  Deal with the consequences of pushing nonstop anti-Black hatred for fun and political advantage combined with lax gun laws leading to dead Black people.

Now that it has also resulted in renewed attention on the Confederate flag as a symbol of hate that needed to die 150 years ago, we hear the whining coming from groups like like the Sons of Confederate Veterans trying to pimp that `Heritage Not Hate` BS.

Don't even try it.  The Confederate flag not only represented a group of traitorous states that fomented an armed rebellion against the US government, they did so for the sole purpose of keeping my people perpetually enslaved.

You are still bitter you lost 'The War To Perpetuate Slavery`and have been taking your Civil War defeat out on Black people ever since.

And when my people began to march against unjust Jim Crow laws in the 1950s and 1960s, you unfurled that flag across the South as a big middle finger to us and the country.  You rallied around that racist flag in order to don pointed white hoods and conduct terrorist attacks aimed at Black people an intimidate righteous white people into silence.

That flag has a 150 year heritage of hate, and it is past time that it be consigned to the dustbin of history.  It is also past time we tell the truth about that flag being anything but honorable.