TERF's Have Zero Say In Defining My Black Trans Life

I got to see the transphobic piece of TERF trash written by Elinor Burkett for the New York Times (which I refuse to link to) and have held my tongue for a few days to process that waste of bandwith op-ed that has been seized on by transphobes who want to get the anti-trans hate on.

People have asked me my opinion about what she wrote. so here goes.

I have zero respect for people who hate me and my trans community and wish to oppress it by any means necessary.

I have zero respect for another Trans Exclusionary Radical Feminist white woman who makes it clear in another published screed she never has and never will know what being trans is like, arrogantly thinks she has the power to define us and uses her privilege and media access to demonize and oppress trans people.

I'm also beyond sick and tired of being sick and tired of media outlets repeatedly giving white TERF's space in their publications to publish these so called contrarian pieces that are barely disguised TERF anti-trans hatred.

Burkett, Burchill and everyone else in TERF World want to keep ignoring the fact that despite trans exclusionary radical feminism's unrelenting 40 plus year failed effort to morally eradicate transsexuality from existence,  and still we trans feminine women rise.

That rise is being led by trans women of color sick of their words that translate into death, pain and misery visited upon our trans ranks.   And contrary to what your vanillacentric privileged TERF egos may tell you, you don't get to define the parameters of trans womanhood and what terrain the discussion will be held on, we trans women do.

The other thing that has pissed me off about this whole ongoing Caitlyn Jenner discussion is that  unless it has happened and I've missed it while handling some personal business, I have yet to hear the voices of cis non-white women in this media conversation. 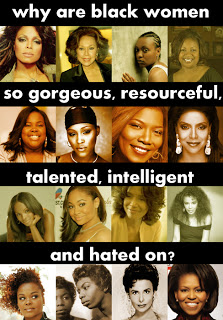 When it comes to what feminists are thinking about trans women, I will take my cues from people like Melissa Harris-Perry, Kaila Story and Brittney Cooper just to name a few along with other thoughtful Black cis women who know that we Black cis and trans women have far more issues that unite us than divide us.

Both Black cis and trans women are also aware that Black womanhood has been under attack for four centuries, and it is in our mutual interests to end that demonization of Black femininity.

It's also in our mutual interests to jointly hammer home the point to the Black community that if #BlackLivesMatter, some of those Black lives that matter are also Black trans lives.

It does not help our community when Black trans people are facing 26% unemployment.   We Black trans people need to be in a position to whee we can not only make a decent living, but be in the position in which we can contribute our talents to uplift all African-Americans.

And that needs to happen sooner rather than at some future date.

It is also in the mutual interests of Black cis women in the spirit of Black lives mattering to speak up against the attacks by white TERF's on the femininity of their trans sisters.  They need to drive home the point white women do not speak for Black women when it comes to discussing the parameters of what femininity is, and especially what Black femininity is.

And the cool thing about that is we continue to have dialogue about what sisterhood between Black cis and Black trans women looks like in practice.

You TERF's don't get to in your loud and wrong terms slime trans women because you have never walked a nanosecond in our pumps.  Neither do you as white cis women know what it is  like to be a non-white cis or trans woman because race impacts our transitions and our trans lives.

But non-white cis women are intimately aware of that intersection of race and femininity, and have more than a clue about what it's like to be hated for who you are for existing on Planet Earth in a Black feminine body. .

So no TERF's, you have zero say in defining my Black trans life.  I and other trans women of color thought leaders do.