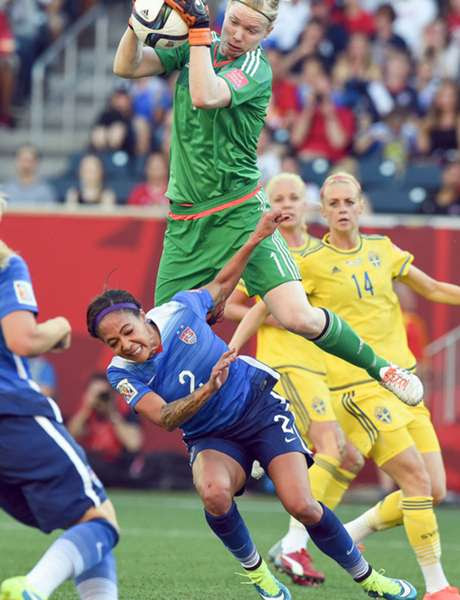 The final group play match for now FIFA ranked number four Team USA is taking place in Vancouver against Nigeria with much at stake for the Red, White and Blue. (We have to come up with a cooler nickname for our team).

They also slipped two spots in the FIFA world rankings.

Thanks to Meghan Klingenberg's header that preserved the 0-0 draw against Sweden, a win by Team USA in tonight's match at BC Place Stadium will allow them to clinch the 'Group of Death', punch their ticket to the knockout round, have an easier bracket, and face off in Edmonton June 22 against the third place team from either Group B, E or F.

If the Nigerians do something they have never done in Women's World Cup  competition and either upset Team USA or draw with them, it could depending on the result of the Australia-Sweden match either have them facing the Germans in Ottawa on June 20 , finishing second with a less favorable knockout round draw or knock them completely out of the tournament well short of their goal of winning the World Cup.

So Team USA better not fall asleep on the job tomorrow night because they have much riding on the outcome of this match.  While Team USA's defense has been improving, their offense is a concern for Team USA fans.

Here's hoping that whatever is ailing Team USA on the offensive end will get rectified starting at 7 PM CDT and continue through the rest of the tournament.
Posted by Monica Roberts at 12:00 AM