Just west of me in San Antonio is a mayoral runoff election taking place that not only has the eyes of Texas on it, but the national TBLG community as well.

'Poison Ivy' as she is sarcastically called by the San Antonio LGBT community has been under fire for saying that the San Antonio NDO's TBLG  protections are 'a waste of time.    She repeatedly snubbed the local BTLG community that had serious reservations in the first place when she was appointed by council to fill HUD Secretary Julian Castro's unexpired term to become San Antonio's first African-American mayor..  She was one of the NO votes when the San Antonio NDO passed back in 2013.

Sen Van de Putte on the other hand is the political polar opposite.  In addition to recently running for lieutenant governor, she has been a longtime supporter of our community.  She supported the San Antonio NDO, and filed legislation to add sexual orientation and gender identity to Texas non discrimination statues in the areas of employment and housing. 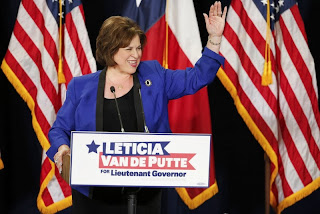 But since no one got 50% of the vote to win the seat outright, the runoff is being contested between Van de Putte, who has served the city as a state rep from 1991-1999 and a state senator from 1999-2015 and the interim mayor fighting for her first full term she promised not to run for when she was elevated to the interim mayor spot..

The runoff election to decide San Antonio's next mayor will take place on June 13, but the early voting phase of it started yesterday and will run until June 9.   Polling stations will be closed on Sunday June 7, but reopen on June 8-9.

It'll be interesting to see which one of these women emerges victorious on June 13, and the TBLG community hopes it will be Sen Van de Putte.
Posted by Monica Roberts at 12:00 PM