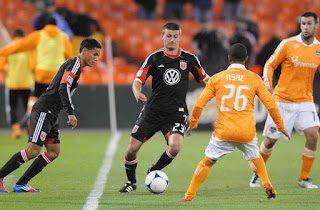 The Men In Orange handled their playoff business last weekend at BBVA Compass Stadium and walked out of there with a 3-1 first leg MLS Eastern Conference Final win against DC United after trailing at the half 1-0.

The Dynamo head into this 3 PM CST second leg game at RFK Stadium in the enviable spot of needing only a win, draw or not losing by more than two goals in order to secure their second straight trip to the MLS Cup title game.

If they do earn it, they will have to play in either Los Angeles or Seattle since MLS has changed the championship game format to where it is played at the home arena of the participating team with the highest seed.  And right now assuming things stay to form in the MLS Western Conference final it looks like the Dynamo will be getting a rematch against the LA Galaxy

It's looking good for them right now, but they still have to play the and survive that match in front of DC United's rowdy fans before they can start making travel plans to either LA or Seattle and MLS Cup 2012.