Shut Up Fool Awards- I Love The Houston Dynamo Edition 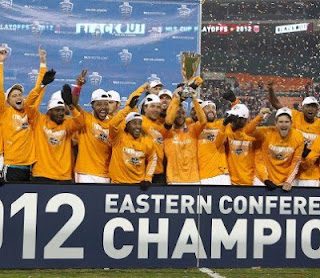 MLS Cup 2012 happens tomorrow in Carson, CA at the Home Depot Center and for the second consecutive year it features our orange clad football team playing in it against the LA Galaxy.

Hoping there's a better ending for the Dynamo in this championship game than MLS Cup 2011 and David Beckham goes home disappointed in his last MLS game.  Have a better shot this year of making that happen with Brad Davis back in our lineup and one of the best goalkeepers in MLS in Tally Hall.

So we'll find out on Saturday if there will be another championship parade and celebration on the steps of City Hall.   But one thing you loyal TransGriot readers won't have to wait for is finding out what fool, fools or group of fools won this week's Shut Up Fool Award.


And just a reminder, the 2012 Shut Up Fool Of The Year will be announced on December 31, so get those nominations as to who you think was the biggest fool this year in to me by December 26.

Moving on to this week.

Y'all ain't slick.  We know the reason y'all are doing it is to force the POTUS to appoint Sen. John Kerry (D)  to create a senate vacancy that the defeated Scott Brown could attempt to fill in a special election.

Didn't y'all learn anything from opposing Elizabeth Warren's nomination last year?   Guess not.

Honorable mention number two is Grover Norquist, who is seeing the iron grip he's had on the GOP no new taxes policy with his pledge slip away and he ain't liking it..

Honorable mention number three goes to Fox News fembot Gretchen Carlson who spent a little too much time at Rep. Michele Bachmann's knee as a child. (Bachmann was Gretchen's babysitter)   Carlson and Fox Noise have once again launched their faux 'War On Christmas'

This week's winner is Rep Louie Gohmert, (R-TX) who I'm sorry to say is from my home state and 182,000 East Texas idiots reelected to Congress for two more years.   Louie is one of my contenders for 2012 Shut Up Fool Of The Year, and he has his own batturd crazy conspiracy theory about what transpired in Libya.

"This administration sent planes and bombs and support to oust Qaddafi so that al-Qaeda and the Muslim Brotherhood could take over Libya." 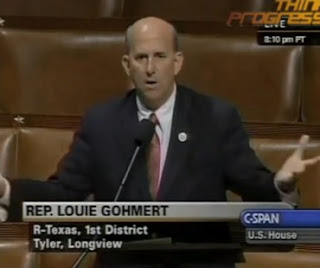 No idiot, President Obama sent them to forestall a looming massacre in Misrata.  And guess you forgot it's his admninsttion that not only got Osama bin Laden but 28 of the 30 leaders in al-Qaeda

Dayum, first it was 'terror babies', then allowing gay servicemembers would be a threat to the survival of the US, then it was jumping on the crazy train with Michele Bachmann and accusing Huma Abedin of being a member of the Muslim Brotherhood.

What next to secure your candidacy for 2012 Shut Up Fool of the Year?  Next you'll be ranting about your precious bodily fluids.