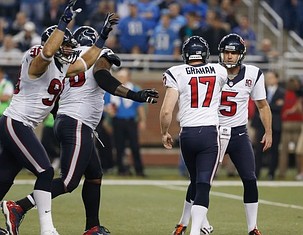 The 2012 NFL regular season is three quarters completed. In the final weeks we will have the AFC and NFC division leaders trying to nail those titles down and jockey for top seeds in their conferences while others will make their last push just to get into the playoffs.

Once you get to the playoffs, anything can happen and you could get hot enough to earn that trip to New Orleans and be hoisting the Vince Lombardi Trophy in February.   Ask the New York Giants about that.

Then there are the also rans and hard luck teams who will be competing to see who gets the number one pick in the 2013 NFL draft.

My hometown NFL ballers are 10-1, are having their best season in franchise history and despite battling injuries on the defensive side are in good shape to have home field throughout the AFC playoffs.  But some challenging games remain on their schedule that include one huge one against the New England Patriots, three remaining AFC South Division games starting with the Traitors this weekend, a home and away series with the Indianapolis Colts and the last NFC North game with the Vikings.

Speaking of challenges, Mr Watts has creeped up on me to the point where my once formidable seven game lead is down to one game with four weeks to go in the regular season.  I didn't help the situation by not following my instincts in the Cowboys-Redskins game.   Got to do better than the 8-8 I had in Week 12 because I know Mike is going to have another bad week before this season ends.

Let's see if it's this week.  Mike's picks are here.   Mine are in underlined bold print.

Sunday, December 2
Seahawks at Bears
Vikings at Packers
49ers at Rams
Cardinals at Jets
Panthers at Chiefs
Colts at Lions
Jaguars at Bills
Patriots at Dolphins
Texans at Titans