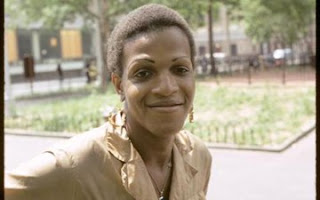 Marsha P. Johnson was one of our trailblazing trans women as a Stonewall veteran, activist and a co-founder of Street Transvestite Action Revolutionaries (STAR) with Sylvia Rivera.   Her body was found floating in the Hudson River near the Chelsea Piers after the 1992 Pride March.

The NYPD controversially ruled her death as a suicide over the objections of friends and supporters who emphatically stated she was not suicidal.

It was also anecdotally reported that Marsha was harassed near the spot where her body as later found.

Anyone in the trans community could have told them there is more to the story of any transperson's death, especially in light of the fact we face horrific levels of anti-trans violence aimed at us.  When you are dealing with the death of any transwoman found under mysterious circumstances as Marsha was then, those foul play angles need to be looked at until they can definitively be ruled out

According to the Village Voice, thanks to the efforts of trans activist Mariah Lopez, the trans daughter of the late Sylvia Rivera,  the Manhattan DA's office has assigned a person to look into the case of Marsha P. Johnson and find out what really happened to her.

Lopez believes as Sylvia Rivera did at the time that Marsha was murdered.  Lopez is also working to gather support for getting a permanent memorial statue of Marsha placed near the Chelsea Pier.

Granted it's 20 years later, the evidence and trail has grown cold, but it's worth it to definitively know what really happened to Marsha and the sequence of events that led to her untimely death.
.
Posted by Monica Roberts at 12:00 PM