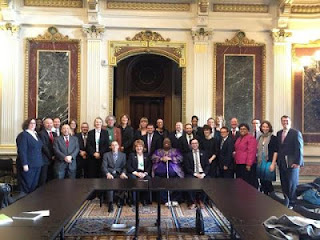 If some of you thought that Vice President Joe Biden was selling woof tickets during the campaign about considering trans issues the civil rights issue of our time, and mine and the other trans folks assertion that President Obama's administration has been the best ever on trans rights issues, we have more evidence of how serious they are.

A meeting was held yesterday in which TPOCC Executive Director Kylar Broadus, Marisa Richmond, and DC Human Rights Commissioner Earline Budd were just some of the 20 plus people in attendance meeting with White House staffers to mark the Transgender Day of Remembrance and discuss ways in which we can work together to ensure dignity, equality, and justice for all people.

They also discussed a range of issues and concerns of importance to transgender people, building upon the progress for our community begun during his first term what can be done to ensure the safety and wellbeing of all transgender people in the States and around the world.

Glad to hear it happened, and hope we see even more meetings and initiatives like this between the Obama Administration and transpeople around the country in the years ahead.