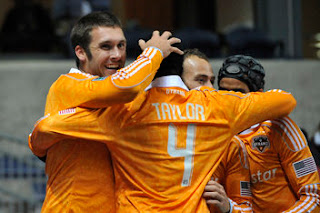 My hometown has a second football team that is in the playoffs and going for a championship.

Instead of wearing battle red, liberty white and deep steel blue, helmets and a lot of padding as they play their 60 minute games at Reliant Stadium to sold out crowds, they wear orange uniforms and kick a round ball around for 90 plus minutes over at a sold out soccer specific BBVA Compass Stadium in front of their passionate fan base.

I'm talking about the Houston Dynamo, our Major League Soccer franchise that has been quite successful ever since they started play here in 2005.  They not only won back to back MLS cup titles in 2006 and 2007, they are the defending Eastern Conference champions and played in the 2011 MLS Cup game last year. 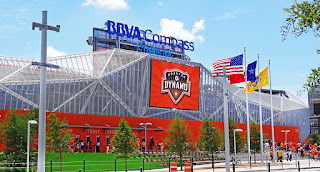 They also became only the fourth MLS squad in the league's 17 year history to go through their home schedule undefeated and have a 27 match winning streak in games played in H-town dating back to last season.

The Dynamo struggled through most of the 2012 season and qualified as the fifth seed in the Eastern Conference, but they have a tendency to turn up their level of play when it's playoff time as they demonstrated last year.

The Men In Orange have already gotten their 2012 MLS playoff run off to a successful start by taking down the Chicago Fire 2-1 in their knockout round match played on October 31.

They play Sporting Kansas City, the team they knocked off last year to get to the MLS Cup championship match they lost to the LA Galaxy in their two leg Eastern Conference semifinal later tonight at BBVA Compass Stadium.   If they are successful in knocking off SKC, they will move on to the Eastern Conference finals against either DC United or the New York Red Bulls.