As I mentioned in my earlier post, I'm with my Houston and Texas rainbow crew and our allies getting my learn on at the UH-Clear Lake campus and reporting on the happenings for the 4th Annual Texas Transgender Nondiscrimination Summit.

But you longtime TransGriot readers know what happens at 12 PM CDT every Friday without fail.  It's Shut Up Fool! Awards time.   I take a moment to shine a bright spotlight on the fool fool or group of fools that have said or done something so monumentally stupid that I got to call them out on it

Honorable mention goes to Florida Lt. Gov. Jennifer Carroll (R) who has never heard of the term lipstick lesbian and seems to think that attractive Black women don't engage in 'relationships like that'  that in many cases are longer than her 29 year marriage.

Honorable mention number two goes to Rep. Michele Bachmann  (R-MN) , who I had to pull out of 2011 SUF Lifetime Achievement Award hibernation for her attempt to smear Secretary of State Hillary Clinton's top aide Huma Abedin that she's apparently doubled down on.

Oh well, being a vanillacentric privileged conservafool means you never back down on the Islamophobic bigotry, no matter how stupid and ignorant it makes you look.   It's so bad even Sen. John McCain (R-AZ) is crying foul on this. 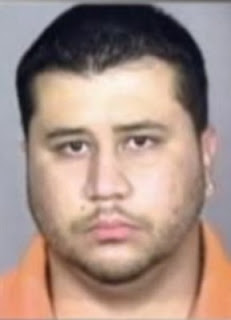 But this week's winner is George Zimmerman, who went on Fox Noise to proclaim that it was 'God's plan for me to kill Trayvon Martin", and he wouldn't do anything differently if he had a do over.

Hope it's in God's plan to have a jury of your peers convict your trifling ass and send it to prison where you'll be ducking and dodging a bunch of incarcerated pissed off brothers who would like to do unto you what you did to Trayvon Martin.

And the possibility you may be an alleged child molester on top of that only will heightens their desire to hand jailhouse justice to you.

All together TransGriot readers:  George Zimmerman, shut up fool!
Posted by Monica Roberts at 12:00 PM